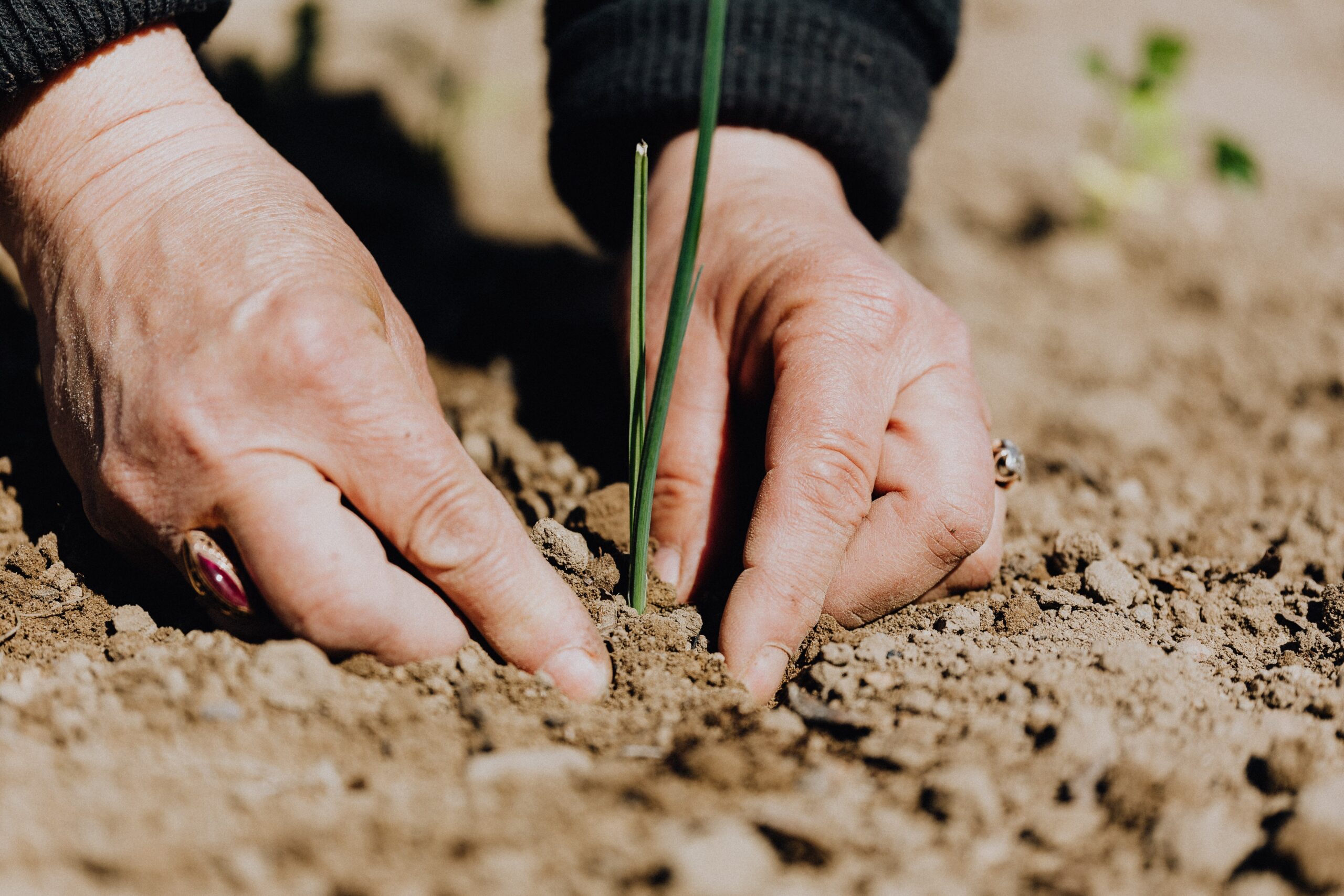 Soil compaction and a reduction in drainage due to heavy agricultural machinery is a problem for both farmers (reduced harvest, flooding) and water managers (drainage, high peak discharges). Initial research has shown that safflower, as a deep-rooted crop, can increase the water storage capacity. A detailed, sustainable application will require further research into the intelligent combinations of crops in cultivation systems.

Soil compaction and poor drainage due to heavy agricultural machinery is a major issue, particularly with heavy clay soils. Farmers are struggling with flooding and harvest losses, while water managers are contending with run-off and high peak discharges. The mechanical improvement of soil has its limitations. Can deep-rooted crops ensure greater water storage capacity?

In the Netherlands, 18% more precipitation falls now than in 1900. As a result of climate change, extreme weather will occur more frequently, with a predicted increase in precipitation of 25-108% by 2050. Furthermore, the summers will become increasingly dry (Lenderink et al., 2011). Although this provides a longer growing season, it also presents a huge challenge for the Dutch water system. For the heavier soils, particularly the clay polders in low-lying Holland, such as the Haarlemmermeer, the Wassenaarse Polder and the Gelderswoudsepolder, the challenge is extra large because the permeability there is already poor by nature (Van den Akker et al., 2015). However, it also has a more wide-ranging impact: Of the soil in the Netherlands, 45% is compacted due primarily to heavy agricultural vehicles and a decrease in soil life (Van Os, 2017).

If the soil is not sufficiently permeable, water will simply stay on the surface of these plots. The capillarity also decreases, preventing the groundwater from reaching the roots of the plants. This can result in harvest losses of 20 – 40% (CLM, 2015). Due to more extreme weather (downpours, droughts), this problem is worsening.

To make the soil more ‘climate-proof’, the pore volume must be increased, especially in the compacted layer underneath the tillage layer, thereby increasing the water storage capacity. Soil subsidence (compaction) often starts at the bottom of the tillage layer (at 25 – 30 cm) and can extend up to a depth of 80 centimetres (CLM, 2015). Mechanical methods to combat soil compaction are expensive and mainly target the top 25 – 30 centimetres. Deep ploughing is often not desirable due to the large amount of iron and sulphur in the deeper layers of soil (so-called ‘cat clay’). Sustainable forms of soil management are required that are not at the expense of agricultural practices.

We have researched whether deep-rooting crops can increase water storage. We used six crops that showed clear soil improvement in previous research (Reubens et al., 2010, USDA 2019): safflower, parsnip, hops and a mixture of three green fertilisers (lupine, clover and alfalfa). These crops can be used in a conventional agricultural rotation. Therefore, perennial crops such as reeds, horseradish or energy grass were not taken into account.

In the Leiden University Living Lab (www.levendlab.com), we completed an experiment with 25 water bed core samples measuring 1 metre deep with a diameter of 25 centimetres from the Wassenaar polder (52.10’51.8”N 4.39’41.9”E). The plot in question had not seen good harvests for years due to the strong compaction of the soil, thereby forming a ‘worst case’ scenario. The idea was that plants able to root these soils are also likely suitable for other soils. The six crops were compared in a one-time operation with steel pins (6 mm in diameter) that were driven 80 centimetres into the soil, and a control for which nothing was done. Due to the persistent drought in the months of May to August 2018, all of the soil cores were irrigated twice a week with ditch water (8 mm), which is comparable to the normal amount of precipitation in those months.

During the trial, the infiltration rate was determined twice weekly as the time required for the irrigation water to be absorbed completely into the ground. At the end of the trial, the absorption capacity was determined as the volume of moisture absorbed after an extreme shower of 100 millimeters (10 litres per waterbed core sample) and that does not flush out. The rooting and moisture content were then determined by taking a sample at three separate depths (15, 30 and 45 cm) and determining the moisture content after removing and weighing the roots.

Besides the experiment in the Living Lab, we performed a field test on a plot in the Wassenaar polder with 36 sample plots measuring 2×2 metres, where exactly the same treatment was carried out. The extremely dry summer of 2018 was apparently too difficult for most crops. A month and a half after being sown, safflower was the only species still present in substantial densities, but by mid-June a group of pigeons had made short shrift of this.

Parsnips and hops exhibited scarcely any growth (plant heights after four months < 10 cm). During a seven-week period, the green fertilisers and safflower reached an average height of 35 centimetres. At the start, the infiltration rate was higher in the treatments with plants than those without (mechanical treatment and control). After six weeks, the infiltration rate was the highest for safflower, green fertilisers and hops (Illustration 1A). The control and the mechanical treatment had the worst performance.

At 17%, the moisture content of the soil for safflower was the lowest. The soils for the safflower were significantly dryer than for most of the other treatments, at approximately 25%. Safflower, therefore, flourished better in dry soils (this was also apparent from the field trial).

The soil’s absorption capacity at the end of the trial appeared to be highest for safflower: 92% of the water was stored (Illustration 1B). With other crops, this was considerably lower at 80 – 85%, while the unvegetated control, on average, only absorbed 77% of the water. That safflower scored so well is not astonishing given the lower moisture levels in the soils for the safflower.

At the end of the summer, the root penetration was the deepest by far in the soils containing safflower (up to > 45 cm deep). The roots of three green fertilisers grew to a depth of 25 centimetres (Illustration 2). Deep rooting was practically absent (< 10 cm) with the other crops.

Of the crops researched, safflower clearly stood out: the root penetration was far and away the deepest (up to 45 cm) and the moisture content of the soils was the lowest. Safflower, therefore, drew the most moisture from the soil. The absorption capacity and the infiltration rate were also the highest.

Safflower is a plant found in arid regions that was grown in the Spanish colonies in South America as early as the 17th century (Oliver et al., 2005). The conditions there might be similar to those of the compacted clay soil of the Wassenaar polder, given that the moisture content measured for the safflower was close to the permanent wilting point for this soil type (15 – 20%). Based on our research, however, it is not clear whether these characteristic could ensure better drainage and increased water storage capacity out in the field. This will require trials on a larger scale (which we will also complete in 2019). In this way, we hope to find out more about the period in which these measures have an effect and what the impact is on the nutrient levels and the soil life.

A larger pore volume of the soil has major benefits for farmers: a reduction in the loss of fertile soil and better drainage. It could lead to a higher organic matter content and healthier soil life. Of course, this only applies if the additional processing does not cancel out the positive consequences.

However, a crop like safflower must match the business operations, including all the processes. That is why it is so important to test the crop treatments at the end of the season. Combinations of crops can also be researched, such as safflower with green fertilisers or other deep-rooted crops such as fibre hemp.

Of course, the question remains as to whether safflower can be profitable. It is grown in Kazakhstan, Mexico and New Zealand for oil-bearing seeds, for the extraction of colourants (yellow and red) and for sale as a saffron substitute (FAOSTAT 2017). To our knowledge, this crop has no application or market yet in the Netherlands.

If this agricultural approach also yields better water storage capacity in the field, this will offers major advantages for water resource managers:

Illustration 1. Infiltration Rate (A) and Absorption Capacity (B) of the various treatments. Safflower, the best performing crop, is circled in red (left Y-axis, time in seconds).

Illustration 2. Safflower had far deeper root penetration than the other crops (percentage of the samples with roots, at different depths).