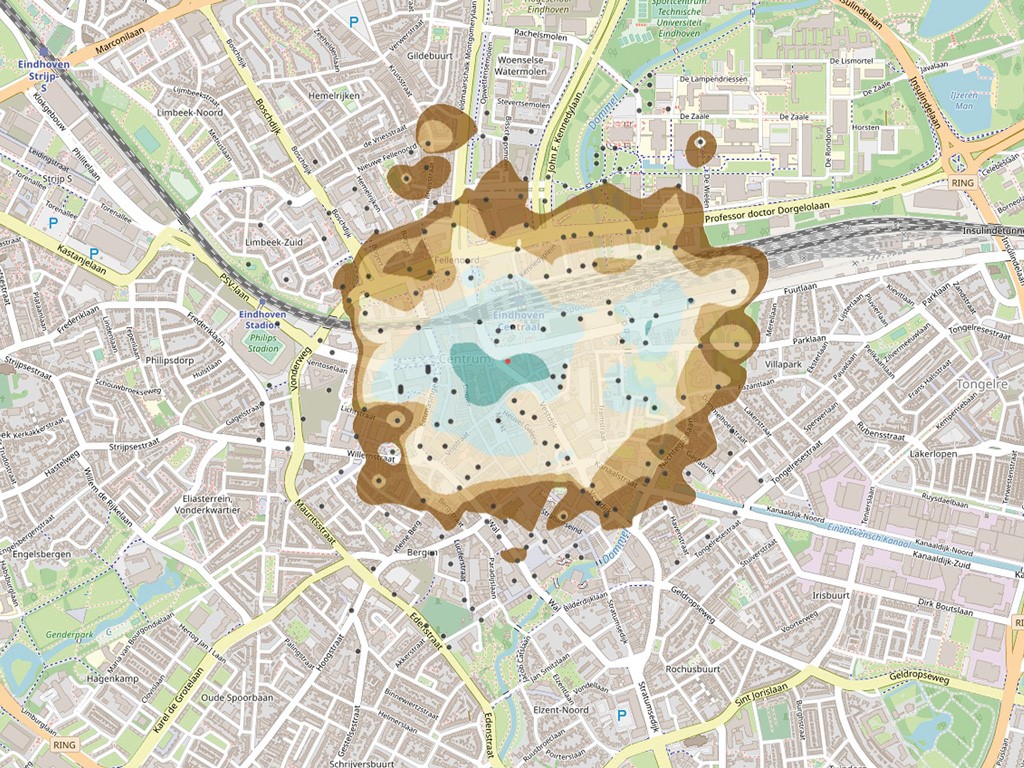 Due to the growing demand for sustainable energy, the number of open geothermal energy systems (also known as ATES (for aquifer thermal energy storage) systems) is increasing. However, there are many contaminants, especially in cities, due to past industrialisation. If ATES systems are installed there, the pollution may spread and dilute, as these systems simultaneously extract and infiltrate groundwater. This is especially the case if the shallow aquifer is used for ATES application. Because dispersion and dilution of pollution is not desirable, it is important to understand the mechanisms of dispersion and any control measures.

The aim of this research is to quantify, on the basis of a case study, the effect of scaling up ATES on the spread of contaminants in the groundwater. In addition, we provide insight into the possibilities for limiting dispersal in practice through good management. The research is part of the WarmingUP research programme on the scaling up of ATES, which is needed for the large-scale application of aquathermy (the recovery of thermal energy from water).

Spreading of groundwater pollution by ATES

ATES influence the spread of contaminants in an aquifer in various ways(Bloemendal et al., 2022):

In areas with many ATES, short-circuit flow is a major cause of rapid spreading. Usually ATES sources are installed so that each system is outside the thermal radius of another. However, the hydraulic radius, defined here as the area in which the water pumped per season is located, is 1.5 to 2 times larger than the thermal radius, and contaminants move precisely within the hydraulic radius.

Using the city of Eindhoven as a case study, three scenarios have been modelled in which the numbers and layout of ATES have been varied:

The simulations cover a period of 10 years. For the two future scenarios (BaU and HD), twomanagement measures were tested to limit the spread of pollution:

The contaminant is simulated as a conservative tracer with no degradation or adsorption, which represents a worst-case scenario for dispersion. Two situations were simulated: a groundwater pollution zone and a pure product zone, the latter covering half the area of the former. Both simulations were performed with a dimensionless concentration of 100. They were evaluated according to the total spread (area of the 10-4 contour in m2) and the degree of pollution, defined as total mass of pollution in relation to the total annual pumped volume of the ATES.

When comparing the three source placement scenarios without control measures for groundwater contamination, the scenario with only the existing systems gives the largest dispersion in relative terms (Figure 1). This is because in this scenario the (few) ATES sources are further apart than in the BaU and HD scenarios. If short-circuit flow between different ATES occurs, the distance over which the pollution spreads is therefore much greater than in the BaU and HD scenarios.

The absolute dispersion increases with more sources, and the contaminated area is therefore the largest in the HD scenario. In the HD scenario, the groundwater contamination zone after 10 years is generally 30-57% larger than in the BaU scenario. However, the number of wells in the HD scenario is also 23% higher (N.B. when the degree of diffusion for the BaU and HD scenarios is compared to the total volume pumped, there is little difference (+/- 1%)).

Therefore, in practice, there is a trade-off between the spread of contamination, the improved thermal efficiency resulting from clustering wells of the same temperature and the resulting optimisation of the use of the subsurface for ATES.

When the pollutant is pure product, the total dispersion in each scenario does not change much compared to the groundwater contamination, although the area of high concentrations is larger.

Measures against proliferation
As might be expected, a net withdrawal of polluted water from ATES leads to a reduction in the total mass of pollution (Figure 2). The reduction in the BaU and HD scenarios is 22 and 28 percent for the groundwater contamination area and 68 and 77 percent for the total mass, respectively. Purification with reinjection is slightly less effective but still gives a reduction of 14-18% of the groundwater contamination area and 49-61% of the total mass. The better performance of net withdrawal is due to the fact that a larger proportion of the contamination is removed.

Figure 2. The effect of different control measures on the spread of a groundwater contamination for the two future scenarios, BaU (left) and HD (right). Each subplot shows the concentration of the pollutant in a 3×3 kilometre area, the contours indicate the dilution level of the pollutant. Each black dot is an ATES source, and the red dot indicates the centre of mass of the groundwater contamination.

The extraction of an additional 10 percent for treatment from ATES wells closest to the contamination proved to be the most effective option for limiting the spread of contamination. Unsurprisingly it was also found that the control measures for net withdrawal and purification and reinjection were most effective in the first years of application. Of the total pollution mass removed, 90 percent was removed in the first three years of the simulation. Moreover, only a few wells were responsible for removing most of the pollution, which means that a measure such as treatment must be optimised in time and space. For example, a tiered treatment can be applied, treating the volumes with high concentrations in the first years, followed by a treatment that is more effective for the disposal of low concentration flows.

The modelling study shows that the locations of ATES sources and the type of contamination (groundwater or pure product) influence the extent to which contaminants spread in the groundwater. The choice and implementation of measures to prevent the spread of pollution therefore also depends on local conditions. Nevertheless, the results make it clear that it is not possible to prevent the spread of groundwater pollution in an area with a lot of ATES. The higher the density of ATES sources, the greater the dispersion. In practice, the best way to limit dispersion is through early assessment of local contamination, appropriate choice of measures and careful selection of ATES sources to apply the measures. Moreover, it is important to apply management measures from the beginning, as they are most effective in the first years of application.