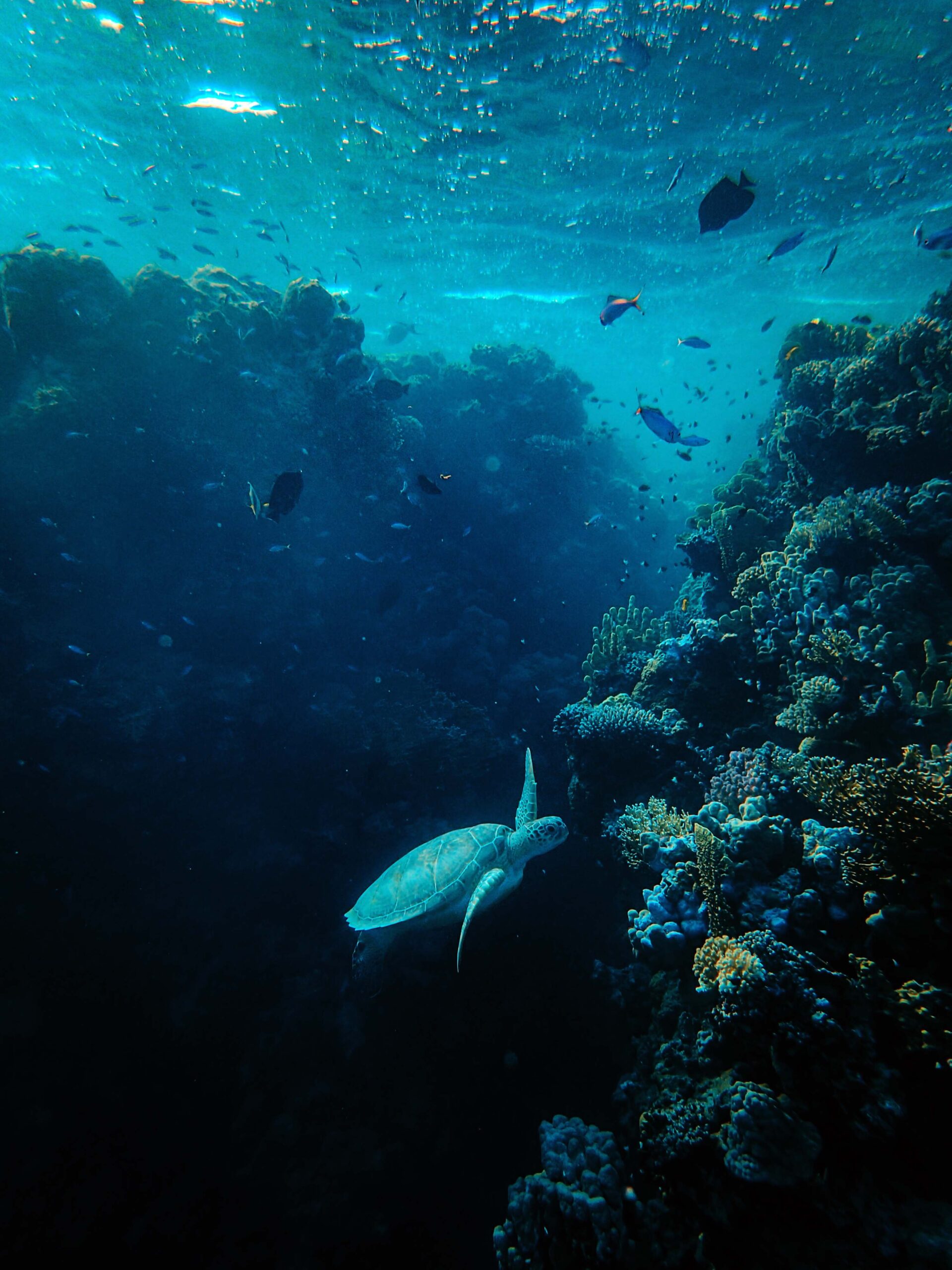 Bodies of water containing many submerged aquatic plants might be hotspots for carbon (and nutrient) storage, particularly in the sediment. Management geared towards maintaining or restoring these aquatic plants can, in fact, contribute to achieving the objectives of the Paris Climate Agreement. In a mesocosm experiment with spiked water milfoil, we found that a four-degree higher water temperature resulted in a larger plant biomass and increased sedimentation. The decomposition of this plant material, however, was greater. The net result was that the storage of carbon, nitrogen and phosphorous in the bottom of the water remained high. These results suggest that bodies of water with submerged aquatic plants that are blooming can capture a portion of the anthropogenic emissions regardless of the water temperature.

Aquatic ecosystems that contain many submerged water plants are potential hotspots for capturing organic material. Aquatic plants store carbon and nutrients in their biomass, and dead plants and other detritus form an organic layer at the bottom of the water. Could similar systems lower the amount of CO2 in the atmosphere? How would the carbon capture be impacted if the water warms up due to climate change?

Mesocosm: a large water tank containing spiked water milfoil; with an inflorescence of this plant.

Not only do aquatic plants provide nutrition and habitat for other (aquatic) organisms, but they also store carbon and nutrients in their biomass. In addition, the water is not as active within a tuft of aquatic plants, which helps dead organic material to settle and prevent turbidity. Aquatic plants also provide structure and surface area for the development of, for example, biofilms that in turn can die and transform into sediment.

The organic layer on the bottom of the water forms a large carbon and nutrient storage and is particularly interesting for both the objectives of climate agreements and for preventing surface-water eutrophication. However, there is still insufficient understanding of how much carbon and nutrients these kinds of systems are able to capture.

A large portion of the plant material that sinks to the lake bottom is broken down by microbes before being recirculated. This mineralisation process is dependant, among other factors, on the temperature of the water. Climate change is expected to lead to a temperature rise in the Netherlands of around 3.5° C by 2100 With higher temperatures, aquatic plants grow faster and form more biomass. Given that this biomass consists for a large part of carbon (C), nitrogen (N) and phosphorus (P), more of these elements may be incorporated at a higher temperature. However: sedimentation and the decomposition of organic material can also increase. What the balance of build-up and breakdown at higher temperatures will look like is still unknown.

In a mesocosm experiment — controlled trials in water tanks under semi-field conditions — we followed the effect of a 4° C rise in temperature on the plant biomass formation of spiked water milfoil (Myriophyllum spicatum) and the sedimentation and decompostion of organic material.

Eight 1,000-litre mesocosm containers were filled with sediment and spiked water milfoil from a mesotrophic, shallow pond in Wageningen as well as tap water. The one-year experiment entailed two temperature treatments: 1) a natural Dutch seasonal dynamic in the water temperature (the control) and 2) the same seasonal dynamic, only four degrees warmer (heated). The sedimentation of organic material (dead pieces of spiked water milfoil and other detritus) with sedimentation deposits was determined on a monthly basis. The microbial degradation of spiked water milfoil was determined by incubating litter bags filled with dried leaf material above the sediment and harvesting it after the ½, 1, 2, 4, 6 and the 8-month mark. At the end of the experiment, the biomass of spiked water milfoil was harvested. Plant, sedimentation and decomposition material was dried at 60° C before being analysed for dry weight and the levels of C, N and P. The degradation rate k and the remaining fraction s (after mineralisation) of these elements were approximated using a two-phase decomposition model.

The storage of C, N andP was calculated with a budgeting model (Velthuis et al., 2018) This model approximates the dynamics of the degradable and residual material in the sediment during the experiment, assuming that the calculated residual fraction s and degradation rate k are representative of the mineralisation and storage of the relevant element within the sediment. The storage of C, N and P was calculated as the sum of the degradable and residual material at the end of the experiment.

The temperature increase led to 80% more biomass of spiked water milfoil in the mesocosms, and the amounts of built-in carbon and nitrogen were also significantly higher (+83 and 52%); this did not apply to phosphorus (Illustration 1). The sedimentation of organic C and N that fell the water bed was more than 1.5 times greater. The mineralisation of C and N with the decomposition more than doubled; here too, P was the exception. 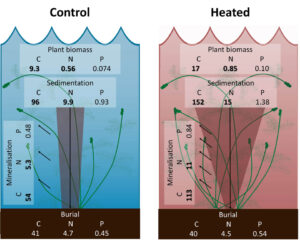 Illustration 1: Pools and flows of C, N and P under the current situation (control) and with a higher temperature (heated). Incorporation in plant biomass g/m2; sedimentation, mineralisation and storage in g/m2/y; significant differences bolded (P<0.05, t-tests). 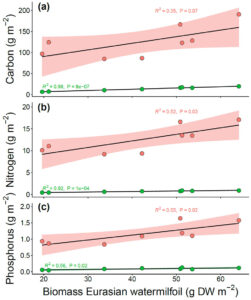 Figure 2: Linear correlation between the biomass of spiked water milfoil at the end of the experiment and the incorporated (green) and sedimented (red) organic (a), N (b) and P (c) with the temperature treatments.

For our study, carbon and nutrient capture in systems dominated by aquatic plants was independent of temperature treatments. This can be explained by the fact that the increased biomass and the sedimentation in warmer water can be compensated by increased mineralisation.

For both temperature treatments, carbon and nutrients were captured in larger quantities in the sediment than in the plant biomass. In warmer water, microbes can rapidly decompose 50 – 75% of these sedimented carbon and nutrients. Nevertheless, a considerable portion remains in the sediment, apparently independent of the temperature. This illustrates the importance of having systems dominated by aquatic plants for the storage of organic C, N and P.

The quality of the sedimented material also plays a role. In fact, it was surprising that there was no observable effect of the elevated temperature on the incorporation of P into plant biomass, while the total biomass of spiked water milfoil was indeed higher. Aquatic plants are known to be flexible in how they use nutrients and their P content, therefore, varies depending on the environmental factors. Warmer water enables plants to deal more efficiently with P; as a result, they require less to achieve the same growth. This can lead to a reduced incorporation of P in relation to C.

Our one-year experiment did not include the long-term effects of the temperature increase. For example, how these results can be linked to accretion processes and also methane emissions (which is a stronger greenhouse gas than CO2) is a necessary question for further research.

If we assume that these results can be translated into a field situation, a large biomass of submerged aquatic plants combined with a low degradation would be desirable for the optimal absorption and storage of carbon and nutrients. These plants would then accumulate at the bottom of the system, which would eventually lead to accretion. As part of a potential application, research

Bearing these critical notes in mind, our research results argue for the conservation and, where necessary, restoration of submerged aquatic plants for the storage of carbon and nutrients.

This article stems from the project ‘Stimuleren van CO2-opname door algen en waterplanten in zoetwatermeren’ (Stimulating CO2 uptake through algae and aquatic plants in freshwater lakes), led by Ellen van Donk and financed by the Gieskes-Strijbis Fund and the NWO Veni grant 86312012 of Sarian Kosten. The authors would like to thank the Limnotron Consortium (Ralf Aben, Garabet Kazanjian, Edwin Peeters, Thijs Frenken, Nico Helmsing, Lisette de Senerpont Domis and Dedmer van de Waal) for the collective implementation of the experiments.