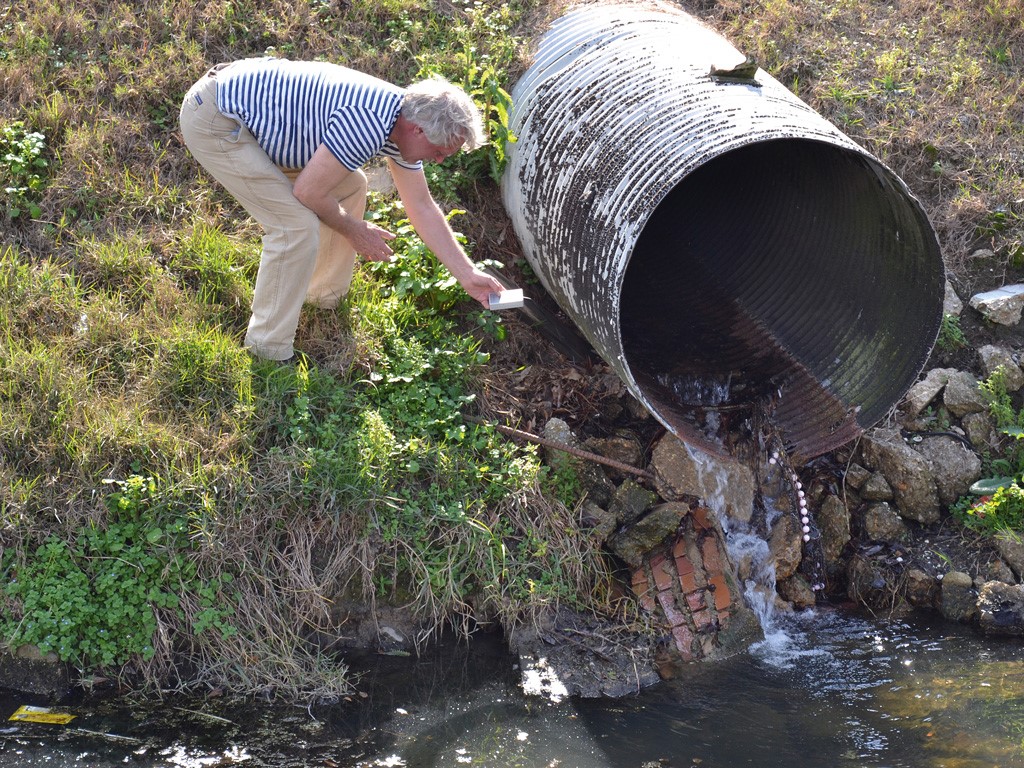 Greater New Orleans in Louisiana consists of three parishes: Orleans Parish, Jefferson Parish and St. Bernard Parish. They are almost completely surrounded by water: Lake Pontchartrain to the north, the Mississippi River to the south, Lake Borgne to the east and wetlands to both the east and west. These wet borders and the fact that a large part of New Orleans lies below sea level create major flooding and drainage problems. Due to the bowl-like shape of these parishes, almost all rain that falls in the area, and seepage that rises, can only be drained off with extensive pumping systems or by evaporation. This drainage system, together with the wastewater system and the drinking water network, plays a crucial role in groundwater drainage and recharge.

New Orleans is equipped with an extensive network of pumping stations (Figure 1) to drain rainwater. The network is designed to drain a maximum of 1 inch (2.5 cm) in the first hour when it rains, followed by 0.5 inch (1.3 cm) per subsequent hour. In total, this pumping system can pump water from the city at a rate of more than 45,000 cubic feet (1,300 m3) per second. However, the pumping stations also drain groundwater, in both wet and dry periods, through the storm drainage system. Due to the age of the storm drainage system and to Hurricane Katrina, this system has been severely damaged. There are many cracks in the pipes and leaks at the pipe connections. Rainwater is drained into catch basins, from where it is transported by gravity through pipes to the nearest drainage pumping station. When it is not raining, smaller “constant duty” pumps remove “dry weather flow” to empty the cisterns of the pumping stations. These constant duty pumps are also turned on when major storms are forecast. They are also burdened by irrigation runoff, domestic runoff from gardens and drained groundwater. In dry periods, the low water level in the pipes and culverts provides groundwater drainage, and in wet periods, the rapid rise in groundwater levels increases the pressure on the rainwater drainage pipes, thereby causing additional groundwater drainage through the storm system.

The current drinking water network in New Orleans has components that are more than 100 years old and therefore, like the other two systems, suffers from leaking pipes. However, the interaction between groundwater and drinking water network is the opposite of the interaction with the other systems. The leaking pipes cause the drinking water to leak into the ground, causing it to be lost. This water replenishes the groundwater system, after which most of it is drained by the closely situated leaking rainwater and wastewater systems.

In a desk study based on data and information from various parties, the magnitude and consequences of total groundwater drainage and leakage in New Orleans through the stormwater drainage system, the wastewater system and the drinking water system were quantified.

To quantify the amount of water drained through the storm drainage system, information from the Sewerage & Water Board of New Orleans (SWBNO) was used. The data were time series for daily precipitation and pump station discharge. An impulse response analysis carried out during the study showed that a significant proportion of the water discharged could not be explained by precipitation. This indicates the presence of drained groundwater in the pump station discharge.

Finally, a water audit by Freeman LLC was used to quantify drinking water losses. The total drinking water loss turns out to consist of two components: the apparent losses and the actual losses. The apparent losses include inaccuracies in customer metering, water theft, illegal connections, data processing problems and billing system errors. The real losses consist of distribution leaks and connection leaks. This study only looked at the real losses, as this is the water that seeps into the ground.

Conclusions on the water balance

The following conclusions were drawn from the desk study: 1) the rainwater drainage system accounts for most of the total groundwater drainage (58 per cent); 2) 50 per cent of the influent of the WWTP is groundwater, which is a large unnecessary load for the treatment process; and 3) 55 per cent of the drinking water produced infiltrates the soil during distribution, which means that the drinking water losses are a larger groundwater replenishment than the annual precipitation surplus

The huge amount of groundwater that is drained or infiltrated into the soil has major physical and financial implications. Groundwater drainage through the rainwater drainage system and the wastewater system leads to lower groundwater levels. This leads to subsidence through oxidation in peat soils (about 12 per cent of the case study area). In mineral soils such as clay (51 per cent of the case study area), a damaging shrink-swell process occurs whereby the subsoil dries out in dry periods and shrinks and swells again in wet periods. The more the land subsides, the more groundwater has to be drained to prevent groundwater flooding, resulting in further subsidence – a vicious circle.

Since subsidence occurs at different rates depending on soil properties and groundwater conditions, there are many fractures, cracks and sinkholes in roads, car parks and patios, leading to high renovation and repair costs. Another financial consequence concerns drinking water losses. More than half of the drinking water produced is lost during transport.

As mentioned above, 50 per cent of the influent of the WWTP is drained groundwater which does not need to be treated. This places an enormous burden on the wastewater treatment plant, is bad for water quality and costs a lot of money. During big storms, this leads to direct wastewater discharge into the Mississippi River because the WWTP cannot cope with the amount of influent plus drained groundwater.

Repairing these systems is essential to solving all these physical and financial problems, but it is expensive. Not all pipes can be replaced at once. It is important to identify the most critical locations (oldest pipelines or pipelines in areas worst affected by Hurricane Katrina) and to repair them first. Furthermore, additional research is needed before repairs can be started at a location, in order to locally predict the influence of different drainage and recharge fluxes. Restoration of the rainwater drainage system can reduce groundwater drainage, which can lead to groundwater flooding. Or vice versa: the restoration of the drinking water network decreases the groundwater recharge, which may accelerate soil subsidence.

This desk study focused on New Orleans, but groundwater drainage and recharge through faulty pipes is a major problem in many places, in both developed and developing countries. This research demonstrates the value of integrated urban water analysis. Before a groundwater model can be created, it is important to thoroughly study and evaluate the available data to understand what is happening in the field. Only then can a model be created that accurately represents what is happening in reality.

Thanks to Adam Kay and Tyler Antrup of SWBNO for their data and explanations. And to Bob Mora and Jennifer Snape of Batture LLC for their monitoring well data; they also put us in touch with Sean Walsh of Eustis Engineering LLC. Finally, thanks to Christopher Sanchez from Stantec for his help with the wastewater model and Tor Tornqvist for the Irish Channel groundwater data.