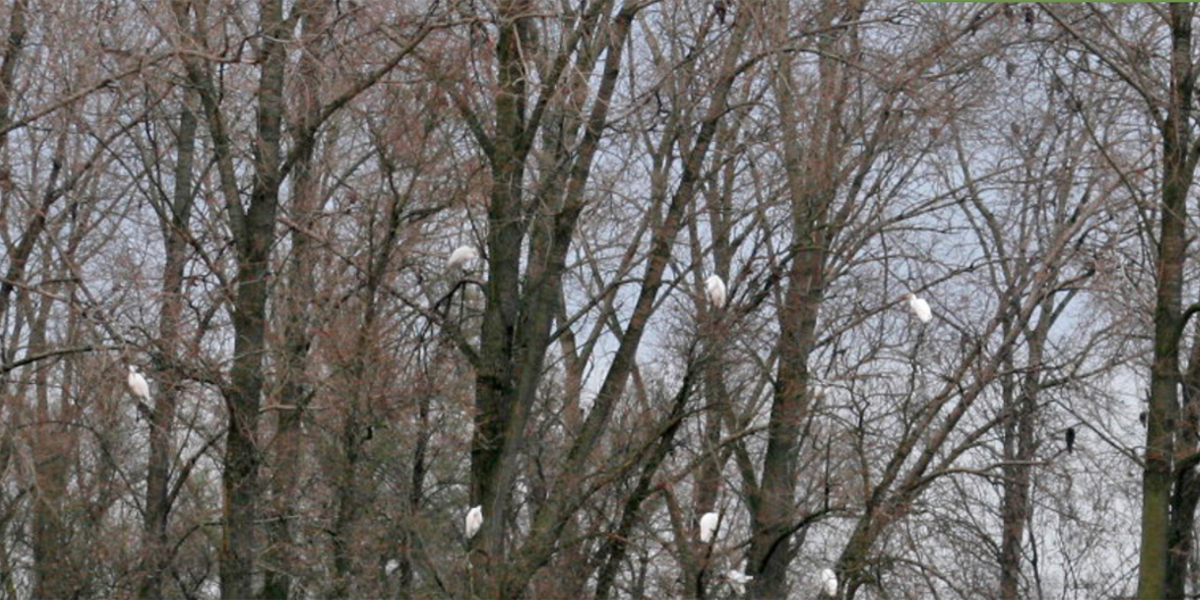 Efforts to reduce the eutrophication of Dutch waters are sometimes only marginally successful. This study investigates the significance of bird manure for the nutrient balance of our surface waters and presents a national picture for the first time. This shows that the contribution of birds in general is small. Only in a few dozen areas is the contribution potentially significant (>10%). Whether or not there is a problem in those areas should be determined by on-site investigation. Indeed, in specific small-scale situations, the picture may differ from the assessment with the model used, due to the application on the scale of drainage areas.

Many waters in the Netherlands suffer from water quality problems due to an excess of nutrients. Efforts to reduce eutrophication sometimes have limited success and it has been suggested that this may be due to nutrient inputs from large numbers of birds. Logically, this would mainly concern birds that concentrate in colonies and roosts, but forage outside the area. Indeed, some case studies in specific areas indicate a potential increase in the external nutrient load of tens of percentage points. The question is how widespread this problem is.

This modelling study, commissioned by EmissieRegistratie (Pollutant Release & Transfer Register; PRTR) and carried out by Deltares in collaboration with Sovon Dutch Centre for Field Ornithology, has attempted to paint a national picture of this problem. The study uses three sources: 1) a dataset from EmissieRegistratie, 2) bird data from Sovon Dutch Centre for Field Ornithology and 3) the model Waterbirds 1.1 from the Netherlands Institute of Ecology (NIOO).

The Emissieregistratie dataset gives the load of total nitrogen (N) and total phosphate (P) for each of the 2500 drainage basins into which the Emissieregistratie divides the Netherlands. Based on counts by the many volunteers from Sovon, the average numbers of birds have been calculated for all these areas. A distinction is made between (1) common breeding birds, (2) wintering and migratory birds, and birds that (3) gather in colonies and (4) at roosts in the area, but which often forage outside the area. The Waterbirds model was then used to calculate the amount of nutrients that the birds circulate within the areas (common breeding birds and wintering and migratory birds) or potentially bring in (colony breeding and roosting birds). The model works with separate calculation rules for herbivores, carnivores and omnivores, with carnivores and fish eaters excreting on average over one and a half times more nutrients per gram of body weight than omnivores and almost seven times more than herbivores. The average body weight per species was also included in the calculation rules, as smaller birds excrete more nutrients per gram of body weight. 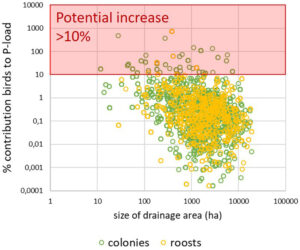 The first two groups of birds – those that do not breed in colonies and those that migrate and hibernate – are present in the area 24 hours a day during their stay, where they both feed and excrete. Regardless of their number, these birds do not contribute to the external load of the drainage basin, they circulate local nutrients. Therefore, the project has continued to focus on the other two bird groups.

Breeding colony and roosting birds forage – at least in part – in other areas from which they can obtain nutrients. This increases the P and N load in the breeding/roosting area. (The fact that nutrients are removed from the foraging areas is not included in the calculations.) This contribution is variable in size and seems to decrease with the size of the drainage area (Figure 1).

According to the Emissieregistratie dataset, the median P load in the 2500 drainage areas in the reference year 2015 was 1.5 kg/ha; the N load was more than ten times higher at 17.3 kg/ha. Figure 1 shows for phosphate what percentage we can attribute to birds (breeding colony birds and roosting birds). 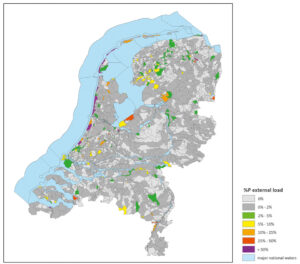 Figure 2. Calculated potential contribution of birds to the external phosphate load of the 2500 drainage areas in the Netherlands

Breeding bird colonies were present in 58% of the drainage areas during the 2013-2015 monitoring period, roosting birds in 20%. Both occur mainly in larger areas and hardly at all in drainage areas smaller than 100 hectares. Thus, in a significant part of the 2,500 drainage areas, there is little or no external supply of nutrients by birds. However, even in the majority of drainage areas that do have colonies or roosts, the potential increase in load is less than 1%, and this also applies to the national total. Only in a few dozen areas, the contribution is greater than 10%. These are mainly areas with breeding colonies. Breeding colonies are often fish-eaters, which excrete the largest amount of nutrients per gram of body weight.

Roosting birds are often geese, which, as herbivores, excrete relatively few nutrients per gram of body weight. Moreover, they produce a large part of their faeces while grazing and leave only about 15-20% in the roost.

As mentioned above, a few dozen out of a total of 2,500 drainage areas may have a substantial contribution of birds to the nutrient load (Figure 1). Whether this is actually the case depends on the local situation. On the one hand, some of the food of the breeding colony and roosting birds may come from the same drainage area, so it is partly an internal circulation. On the other hand, a relatively large proportion of the excrement may end up on land, so that the water is not directly affected. The situation in these areas should therefore be examined locally to determine the extent of the problem. An actual high local contribution may occur, for example, if colonies of fish-eating birds or large roosting birds are located in relatively small lowland moorland waters with limited pollution, such as in the Vechtplassen area. Other examples are vulnerable, relatively food-poor areas such as a number of dune regions and higher lying peat bogs such as the Bargerveen. In the latter area, there is a supply from a large roost of mainly Tundra bean geese, which may add 20% to the phosphate load of the Bargerveen-North drainage area.

Breeding colony birds are usually fish-eaters, which excrete a relatively large amount of nutrients per gram of body weight. In the calculations, the cormorant in particular comes to the fore, which in addition to this diet also has a high body weight and often lives in large colonies. In addition, heron and gull colonies can also play a role. However, not all of these colonies are on or above water. Grey herons can breed in dry forests and parks, herring gulls in extensive dry dune areas.

The proportion of cormorants is also high on roosts, also because roosts are often located on or above water. Geese excrete fewer nutrients, but are also heavy and gather in numbers of tens of thousands of birds, so they still score high.

We see that bird manure contributes only minimally (<1%) to the nutrient load of Dutch surface waters as a whole. Of the 2,500 drainage areas into which the EmissieRegistratie divides the Netherlands, there are a few dozen where there may be a significant contribution (> 10%). Whether this is really the case must be determined by an on-site investigation.

Limitations of this study

In specific local situations, the picture may be different than in the draiange basin as a whole. If all the birds of a large drainage area are concentrated in a small pond, problems may occur locally that are not reflected in the area assesment. On the other hand, the contribution of birds may also be overestimated if they leave a large proportion of their manure in the dry parts of a drainage basin.

Therefore, this method does not reveal all the problems.

Another limitation is that the major national waters are excluded (Figure 2). This is because the contribution to the load by flow between these waters is not included in the EmissieRegistratie (i.e. the bird contribution would be greatly overestimated). This will not change the picture much, because the national waters are generally nutrient-rich. However, the concentration of phosphate in these waters, in particular, has declined significantly in recent decades, as a result of which the relative contribution of birds has automatically increased. Moreover, due to the size of these waters, problems in sub-regions may be underestimated.

The high values in the dune areas (Figure 2) are probably largely due to seabirds breeding on land; these are drainage areas with little open water.

In areas where bird manure causes local problems in the form of conflicts with other natural values, targeted measures are sometimes possible. One example is the isolation of water under colonies by compartmentalisation in combination with adapted water management (flushing).

Control of the colonies or roosts themselves is usually not possible or desirable, as the waters where they are located often also have conservation objectives under the Birds Directive that concern these species. For example, the roost of bean geese, which could prevent the attainment of the improvement targets for raised bog in the Bargerveen, is itself protected by a Natura 2000 conservation target.