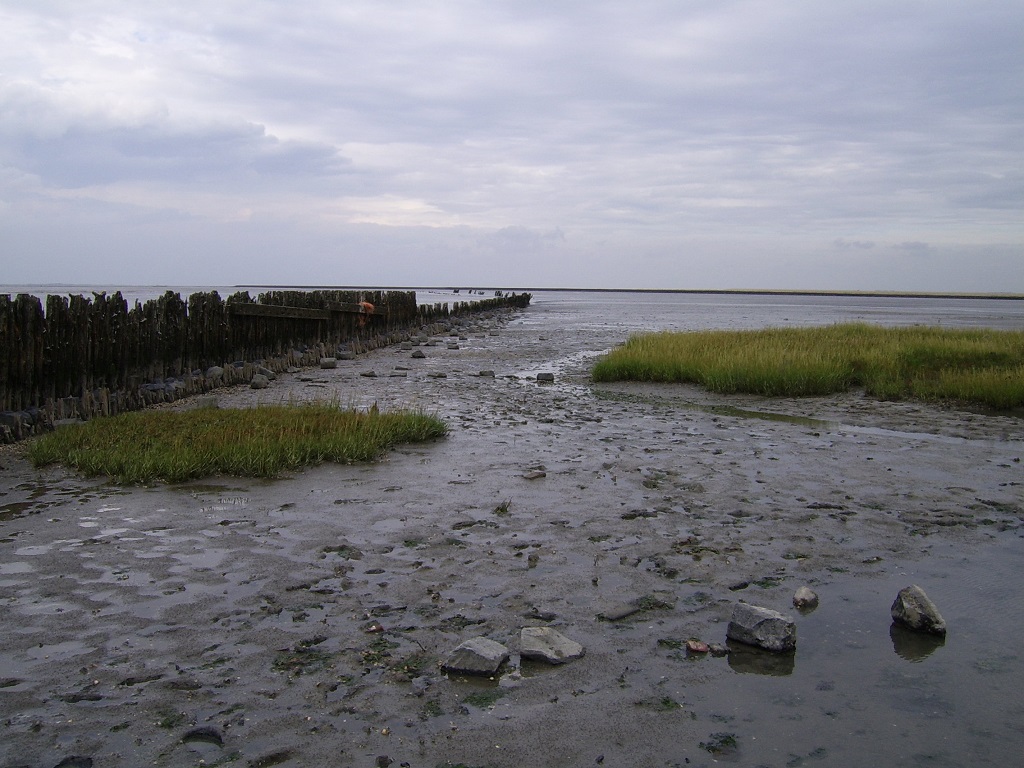 The construction of vegetated forelands like tidal and salt marshes can be a cost-effective measure to improve water safety and provide added value to the ecosystem and society. Forelands with tidal or salt marshes provide adequate dike protection. New forms of collaboration and financing are necessary for their implementation. Recent research conducted for the Koehool-Lauwersmeer dike reinforcement project in Friesland offers guiding principles for other projects within the Netherlands and abroad.

The Netherlands is home to hundreds of kilometres of flood defences that require reinforcement. Constructing vegetated foreshores, such as salt and tidal marshes, represents one option for reducing the load on dikes. This has the effect of lowering flood risks and increasing the ecological value.

Water defences that utilise natural dynamics require a different approach to design, testing and management than traditional water defences. This article describes this innovation from the perspective of hydraulic engineering, morphology, ecology and administrative implementation (Illustration 1). 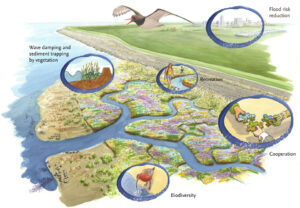 In principle, a dike with foreland does not have to be as high and strong as one without. Multidisciplinary research, however, is required to quantify this. This took shape within the research project BE SAFE (Bio Engineering for Safety).

The Water Safety sub-study entailed calculating wave reduction during extreme storms. Calculation models and field measurements of salt marshes in the Western Scheldt and tidal marshes in the Wadden Sea demonstrate that forelands can significantly reduce a wave attack on a dike, depending on the water depth, the foreland width and the vegetation.

The next questions are whether wave damping also occurs during very extreme storms, and whether the vegetation remains intact. Calculations have shown that vegetation in large bodies of water like the Western Scheldt and Wadden Sea will largely degrade during storms that the dikes have been designed to withstand. While this does not cancel out the wave damping, it does limit it to the effect of a highly silted soil with a rough, stubbly surface and vegetation remnants.

Finally, methods have been developed to estimate how much a foreland can help reduce the risk of a dike breach due to wave impacts and wave overtopping, both within the short and the long term. Foreland variants appear to lower this failure probability and, under certain conditions, are more cost-effective than traditional dike heightening or the construction of a hard cover. Foreland also reduces the risk of the dike collapsing due to piping or shearing of the outer slope.

The Biogeomorphology sub-study researched variations in foreland characteristics, such as salt marsh width, bed level and vegetation, and the consequences thereof for wave damping. The long-term variations were researched by analysing historical data over a period of 60 to 70 years, which covers the typical lifespan of dike reinforcement projects.

In addition, field measurements were used to determine how foreshores will retain their shape over a one-year period.

Many forelands consist of a high-lying salt marsh abutting a dike with lower-lying unvegetated mud flats farther afield. The salt marsh contributed the most to wave damping in the direction of the dike. Wave damping variations in space and time are primarily the result of the vegetation border shifting between a salt marsh and mud flat. This shift depends on the stress caused by the inundation time, as well as erosion and sedimentation. If the erosion and sedimentation are limited, young plants can tolerate a longer duration of inundation. If the soil dynamics are very active, the plants are not as resistant to inundation. On a seasonal timescale, soil dynamics are a greater determinant of the survival of young tidal marsh plants than the direct influence of waves.

Three questions were researched for the Ecology sub-study: i) the reliability of foreland solutions for coastal protection, ii) the natural dynamics of forelands and iii) the compatibility of objectives for nature with those of safety.

According to an analysis of historical storms (1717, 1953), forelands promote water safety by reducing the risk of breach formation and limiting the dimensions of the breach.

The strength of different plant species was also measured in order to predict their wave damping effect and the moment of plant degradation. For this, measurements were taken along a succession gradient (from low-lying to higher salt marshes) and along a salt gradient (from salty to freshwater forelands). The differences between the plant species turned out to be many times greater than the differences between the seasons.

To understand the natural dynamics of forelands and to successfully construct them, the critical establishment conditions for different pioneer species were researched and the decline of forelands was examined. Species variation appeared to cause significant differences in foreland dynamics. Some plant species ensure stable foreland width over the long term while, for other species, the foreland width expands and shrinks cyclically on a timescale of roughly sixty years.

The Governance sub-study looked at the decision-makers’ considerations when implementing natural solutions for water safety. This kind of approach combines several functions, which results in multiple parties participating in the decision-making. Although forelands do promote water safety, and dike managers are obligated to include forelands in their activities and to forge agreements with the users of adjacent areas, dike-foreland coalitions do not happen spontaneously. Differing interests and responsibilities in tandem with historical factors complicate the efforts at collaboration.

What was the reasoning in deciding whether or not to go with an integrated natural solution for the Sand Engine or the Markermeer and Afsluitdijk dike reinforcement projects? Game-theory models of such projects show that the institutional context is largely responsible for the final design. A multifunctional pilot provides more space for natural solutions than a typical water safety project. Beyond this, it appears that the more the natural alternative is able to meet the water safety objectives, the greater the chance for its implementation.

To support decision-makers, this game-theory approach has been applied using the ‘Added value of Collaboration’ tool. The underlying argument is that players will only work together if doing so benefits them more than their current strategy of non-collaboration. The parties learn what they are able to achieve alone and what they can achieve through collaboration. This provides insight into everyone’s interests and contributes to a joint future perspective and to the actual implementation.

For the Koehool-Lauwersmeer programme in Friesland, research was conducted to determine whether a foreland solution was a good alternative to dike reinforcement. The cover and stability of this dike section is no longer sufficient and the dike has been rejected. The water defence should be strengthened for a total of 47 kilometres, and the costs are estimated to exceed €300 million. Tidal marshes are already present at several points along the dike or it is possible to develop forelands using a natural method.

The BE SAFE team explored how a foreland solution contributes to water safety. Along with the parties involved (dike and nature managers, farmers and governments), consideration was also given to the realisation and management of foreland solutions.

It appears to be technically feasible to construct a tidal marsh in front of the dike. One unanswered question, however, is how to deal with changes to the natural environment. What do you gain or lose by turning a mud flat into a tidal marsh? From an ecological point of view, developing a tidal marsh on the inside of the dike would be interesting – due to the tidal inlet and the construction of a second dike – given that no mud flats will be lost. From a cost perspective, however, this is a less attractive option than transforming a mud flat located on the outside of the dike into a tidal marsh.

BE SAFE’s field measurements demonstrated that, during storms, the waves near the dike were much lower with tidal marshes than with unvegetated mud flats. Probabilistic safety assessments show that constructing vegetated foreland allows for the Wadden Sea dike to be as much as roughly 0.5 metres shorter. The wave loads on the dike covers of grass, asphalt and stone paving, in particular, fell sharply (up to 50%); this is often the most expensive part of the dike.

BE SAFE and the Projectoverstijgende Verkenning (Project Transcending Survey, POV) Wadden Sea dikes have worked on the collaboration between the parties in and around the ‘Noard-Fryslân Bûtendyks’ foreland (4,200 ha) to reinforce the dike. Five parties (Wetterskip Fryslân, It Fryske Gea, Nordeast Fryslân Municipality, tenants and the Directorate-General for Public Works and Water Management) have developed solutions that have the support of all the parties. One of the researched themes was rewetting summer polders on the tidal marshes, which affects water safety, tenants and the interests of nature, and where joint action can lead to gains for all parties.

The effects, costs and benefits of a foreland solution are compared with a standard dike reinforcement, which consists of raising and widening the dike and replacing its cover (see the table).

Table 1: A comparison of the foreland solution with standard dike reinforcement

Forelands can be a cost-effective solution for greater water safety that also offer ecological and scenic added value. Moreover, under the right conditions, forelands can grow with the sea level, which makes them attractive for climate adaptation. Implementing a measure like this calls for a multi-disciplinary approach. Ecological and morphological processes interact and determine how much the foreland is able to reduce the wave load on the dike.

Foreland solutions for water safety offer added value for ecology, recreation and spatial quality. At the same time, new forms of collaboration and financing are necessary for their implementation. In concrete terms, there are opportunities in the Netherlands to apply solutions like this along the Wadden coast, in Zeeland and in and around the IJsselmeer and Markermeer. Forelands and their vegetation can also contribute to the safety of river dikes, which is relevant for wave attack.

Finally, the methods developed in this project can also contribute internationally to the development of innovative natural strategies. In many parts of the world, ecosystems such as wetlands and mangroves play a vital role (or used to) in coastal defence.

Cascading impacts and interdependencies, are we taking enough actions towards disaster risks?