The result of 10 years of experience with Ephyra sludge digestion

A new sludge digester has been in operation at the Tollebeek waste water treatment plant in Flevoland since 2017. The digester is an Ephyra system, developed by Royal HaskoningDHV since 2010. Instead of one reactor, there are 3 or 4 reactors connected in series, resulting in more complete digestion and more biogas.

The new method of sludge digestion was developed to give substance to ‘the Energy Plant’ or energy-neutral or even energy-positive sewage treatment. During development, specific attention was paid to:

In this article, we discuss the operation and performance of Ephyra in respect of the aforementioned questions, with particular focus on development from lab to practice scale.

Figure 1. Principle of the Ephyra technology, with 3 reactors as compartments in one digestion tank. Series connection of individual tanks is also possible.

The principle of Ephyra sludge digestion is the use of 2 to 4 digestion reactors or compartments connected in series, rather than a single reactor or tank (see Figure 1). This creates a plug flow type of digestion, unlike in the usual full mixed tank. When compared to a single full mixed tank, plug flow digestion produces fewer short-circuit currents, breakdown reactions occur more quickly, and the individual phases of the sludge digestion process are separated. All of this leads to better digestion with more sludge breakdown and more biogas.

Another important advantage is that average dwell times of 6 to 7 days are feasible, instead of the usual 15 to 20 days. As a result, the capacity of the system is high and more sludge can be processed with the same reactor volume. The shorter dwell times are possible thanks to, inter alia, (patented) recirculation from the last to the first compartment of the series circuit; this control strategy helps to prevent problems including acidification in the first reactor.

From lab to practice

Development started around 2010, with the first ideas and creation of a computational model. The results of the first technical model calculations confirmed the expected benefits over a full mixed reactor, namely better sludge digestion and more biogas. To validate the model results, various tests with batch and continuous systems were carried out at Royal HaskoningDHV’s Technological Research Centre. A number of different sludge types were tested, with different proportions of primary sludge (from pre-sedimentation) and secondary sludge (from an activated sludge system). Comparison with conventional mesophilic digestion once again demonstrated that sludge breakdown was much higher. In Ephyra systems, when secondary sludge was digested, 15% more sludge was broken down, with 15% higher biogas production at the same time

The results of the technical and financial model calculations and the lab tests prompted Royal HaskoningDHV and the Zuiderzeeland Water Board to conduct a pilot at the Tollebeek waste water treatment plant. The idea was that, if the pilot project were to prove successful, Ephyra sludge digestion could be applied in this waste water treatment plant and sludge from Lelystad digested in the future. This would be facilitated by expanding the existing digestion at Tollebeek with an upstream Ephyra tank.

The pilot system consisted of four mechanically mixed reactors connected in series, with internally controlled recirculation from the last to the first reactor. The total dwell time was around 7 to 8 days, and the dwell time per reactor around 2 days.

The pilot showed that the sludge breakdown, averaging 40% dry matter, was in line with expectations.

During the pilot project, peak feeds were also tested, with the total dwell time reduced to 5 days for periods of 5 to 10 days. During these periods of peak load, the system continued to function stably; there was no noticeable drop in pH and sludge breakdown and biogas production remained steady; process control of the internal recirculation system functioned properly (see Stowa report 2016-34).

In addition to the pilot project, we also carried out model calculations involving various configurations and arrangements for use of the Ephyra digester at Tollebeek waste water treatment plant; examples are the number of reactors in series and the degree of internal recirculation.

From pilot to design

The results of the pilot and the model calculations have helped to produce a final design for the practical system envisaged for Tollebeek. The following changes have been made over the 2010 draft.

Use of horizontal mixed reactors

The original design was based on vertical reactors compartmentalised by partitions. This provided to have a number of drawbacks, however. The accessibility of the reactors (compartments) for maintenance was difficult, the reactors were higher than the building heights used in the Netherlands for sludge digesters, and the partitions were sensitive to blockages. The design was also expensive. A design with horizontal reactors connected in series did not have any of these drawbacks. This decision had already been taken prior to the pilot and the pilot system had been adapted to take these changes into account.

3 instead of 4 reactors in series

The model calculations indicated that there was almost no difference between the performance of 3 rather than 4 reactors in series. This was confirmed by exploratory lab tests. In view of the simplicity of the system and with cost considerations in mind, it was decided that 3 reactors in series (in a single tank) was most appropriate for Tollebeek. Using 3 reactors in series has since become the standard when constructing a completely new sludge digester. If converting existing systems, a different design is possible. The 3 reactors/compartments in the practical system at Tollebeek waste water treatment plant have been constructed as slices of pie, hydraulically connected in 1 reactor with a total volume of 1,500 m3.

In addition to the aforementioned design aspects, the pilot study also indicated that sludge, and thicker sludge in particular (as used in sludge digestion), is a ‘special’ medium with a relatively high viscosity. This entails multiple minor adjustments to the design of mixers, pumps, heat exchangers and other equipment, piping and valves.

The Ephyra practical system at Tollebeek was completed at the end of 2017 and is functioning well. A second system has been operational since 2021 as an integral part of the Energy Plant at the Sleeuwijk waste water treatment plant. This is a completely new system (‘green pasture situation’) and also features 3 reactors connected in series in a single tank. In addition, two international systems are in the design and tendering phase, and a new pilot is due to start in Canada. 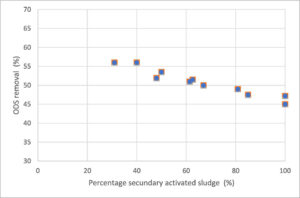 Figure 2. Organic matter removal (ODS) as a function of the proportion of excess sludge as measured on laboratory, pilot and practical scale. 100% means that only secondary sludge is digested. The tests were carried out at approximately 15 days or more of dwell time. 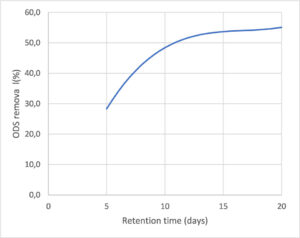 Figure 3. Organic matter (ODS) removal as a function of the dwell time for a sludge mixture of 50% primary and 50% secondary sludge. The graph is based on laboratory tests and model calculations.

How does the Ephyra sludge digester perform?

An important measure for sludge digestion performance is sludge breakdown, often represented as the return from the removal of organic dry matter (ODS) from the sludge. This return depends on the technology used and the sludge input – the latter because primary sludge breaks down more effectively than secondary sludge.

The relationship between sludge breakdown and the percentage of excess sludge to be digested is shown in Figure 2. From this, it can be deduced that if only secondary sludge is digested, approximately 45 to 46% of the organic matter is broken down. As the proportion of primary sludge increases, so too does its breakdown. For a sludge mixture of 50% primary and 50% secondary sludge, the breakdown is approximately 52 to 54%.

This new way of digesting sludge proved to be extremely stable and reliable throughout the entire development period – on laboratory scale, during the pilot project and now in practice.

In 2010, RoyalHaskoningDHV began developing a new process for sludge digestion using the Ephyra principle. Digestion does not occur in just one reactor but in 3 or 4 reactors in series. Laboratory-scale tests, model calculations and a pilot study resulted in a design that was realised at Tollebeek waste water treatment plant in Flevoland in 2017. The new Ephyra sludge digester effects higher breakdown of organic matter and produces more biogas than conventional digesters.

Reduced variety of floodplain nature: a threat of uniformity