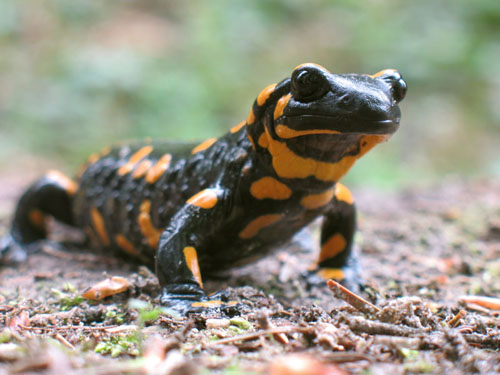 A fungal disease that is deadly to the salamander has arrived in the Netherlands from Asia in wild populations. The disease has been known in Europe since 2013. In 2000, the fire salamander almost disappeared from the Netherlands. Adequate detection and reporting, as well as prevention of the spread, may limit the disastrous consequences.

The fire salamander is our only land salamander. This large, iconic nocturnal animal with its black and yellow markings is (naturally) found in southern Limburg. For many years, volunteers have been monitoring the species during night-time rain showers, ideally just before or after a thunderstorm, in the Bunderbos and Vijlenerbossen forests. Beginning in 2008, the volunteers began to report a striking number of dead animals and a sharp decline in the number of live animals on the transects. These observations led to the discovery of the chytrid fungus Batrachochytrium salamandrivorans (Bsal) (Martel et al., 2013; 2014). This fungus, lethal to salamanders, originates in East Asia and was most likely introduced into the environment through the global trade in amphibians. What can water authorities do to prevent further spread of the fungus?

The Bsal fungus is not the first chytrid fungus to make its home amongst amphibians outside of its natural range. Batrachochytrium dendrobatidis or Bd has caused mass mortality, particularly in Australia and South America. Both fungi cause chytridiomycosis. This disease is considered one of the worst vertebrate infectious diseases in history, due to the combination of high mortality and a broad host spectrum. Worldwide, chytridiomycosis has contributed to the decline of at least 501 species of amphibian (Scheele et al., 2019).

After infection with Bsal, the skin of a sensitive salamander is – quite literally – eaten away. Progression from infection to death in fire salamanders can occur within just two weeks, and only towards the latter stage of the disease are symptoms visible on the skin; animals may also exhibit muscle spasms. The skin then shows black spots, often defined circles, and holes. The animals become lethargic and apathetic but, because the process is rapid, animals can still look fine on the outside. The lesions are very difficult to see in darker salamanders. Information sheets have been produced to help people recognise Bsal (see www.ravon.nl/bsal and www.bsaleurope.com).

The Bsal fungus is a little more robust than Bd. The latter, for example, is poorly adapted to drought, but Bsal has an encapsulated stage that has the ability to float. This allows the fungus to survive for lengthy periods of time in water and soil, and by floating, it is scarcely preyed upon by aquatic microfauna.

Contact for just 1 second is enough for Bsal to be transmitted, and even brief contact between animals can be enough for the fungus to be passed on. Transmission can also be indirect – if an infected salamander walks through a rain puddle, the fungal spores that get left behind can then infect the next animal that walks through the puddle. Humans are also effective vehicles for transmission through their boots, shoes, bicycle and car tyres. Consequently, practising good hygiene when working in the field is crucial to limiting the spread of Bsal (and other pathogens). This of course applies to researchers, site managers and contractors, but also to visitors to nature reserves and participants in excursions. A final important group are the owners of garden ponds.

The density of Bsal in ecosystems is usually low, and the likelihood of finding it is thus low in areas where Bsal has not been previously detected. Since 2012, we have been working with an early warning system that has proven to be an effective and cost-efficient way of detecting Bsal. The EWS operates with a hotline (see https://www.ravon.nl/Zakelijk/Ziektes). Awareness of the EWS is being raised through newsletters, local newspapers and lectures. By regularly asking as many people as possible, including site managers and water authorities, to be alert to sick and/or dead amphibians, to help recognise them and to report them, the chance of detecting an outbreak of Bsal or other relevant diseases is greatly increased.

The EWS yields about 120 reports of sick and dead salamanders, frogs, toads and reptiles annually from locations nationwide. In the event of a suspicious report, the animal can be examined and, if Bsal is found, the location and population can be actively monitored. The EWS helped to detect a new outbreak of Bsal in the province of Gelderland in 2018, some 150 kilometres from the Bunderbos forest (as the crow flies).

In the Netherlands, Bsal is now  known to exist in Limburg and Gelderland. How exactly the fungus spreads is not yet known. In addition to spreading through the host itself, other vectors, including humans, are obvious. The current outbreak sites are often far apart, which suggests that humans are currently the main spreaders, allowing the fungus to bridge large distances and barriers very quickly. The only other possibility is its spread via large rivers, but amphibians do not live in large rivers and the spread of the fungus across Europe has not been linked to rivers. In addition, the fire salamander is a land animal. A Spanish outbreak was very clearly related to a hobbyist who had released animals into the wild.

In more recent times, Bsal has been found in fire salamanders east of the Rhine near to Essen, Germany. Within Germany, ‘jumps’ of up to 170 to 250 km have been known to occur, where natural distribution appears impossible due to the distance and other barriers.

Our current understanding is that Bsal can be cryptically present in salamander populations and is not always easy to detect. New introductions and further spread of Bsal must be prevented to the fullest extent possible. It is known, for example, that isolated fire salamander populations can be kept safe from Bsal by using special ‘toad shields’ (Spitzen-van der Sluijs et al., 2018). Preventive hygiene measures are crucial to preventing the spread of Bsal. This also means that moving salamanders (as well as other amphibians, aquatic plants and water) needs be carried out with great restraint and care to prevent any further spread of Bsal and other pathogens (and invasive aquatic plants).

Disinfection protocols have been developed for the disinfection of large and small-scale equipment (see http://bsaleurope.com/hygiene-protocols/ and https://ravon.nl/Portals/2/Bestanden/Publicaties/Hygiene_protocol.pdf).

Forty per cent of amphibians face a threat to their continued survival, making it the most endangered species group in the world today. The situation in the Netherlands is perilous. The presence of an invasive pathogen is therefore, by definition, worrying and it is vitally important that as many people as possible know that this threat exists. We can all take precautions to avoid the spread – do not move animals or aquatic plants, practise good hygiene in the field and report sick/dead salamanders, other amphibians and reptiles. Reporting allows us to carry out targeted investigations. The options for preventing Bsal from entering a country or region or for mitigating the impact of an outbreak are varied (Thomas et al 2019; Martel et al 2020). At the same time, there is still little practical experience in controlling an outbreak. Intervention to prevent the spread of a known outbreak and to protect populations is possible, but it must be swift and effective – hit hard, hit early, or identify and isolate quickly. 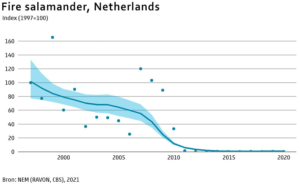 National trend of the fire salamander in the Netherlands. The species has declined by 99.9% and shows no signs of recovery. Sources: RAVON, CBS 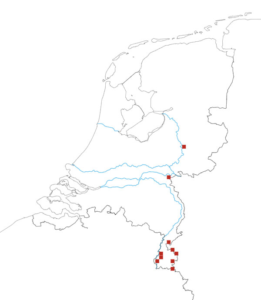 The distribution of Batrachochytrium salamandrivorans in 2021. Source: RAVON

Bsal is an invasive fungal disease from Asia that is fatal to salamanders. The Netherlands’ only population of the fire salamander, in southern Limburg, has been decimated. Putting an early warning system in place has allowed the fungus to be monitored more closely since 2012. Research shows that humans are the main spreaders, and that practising good hygiene when working in the field is essential when it comes to preventing further spread. This applies to water authorities, site managers and contractors, but also to visitors.

The result of 10 years of experience with Ephyra sludge digestion