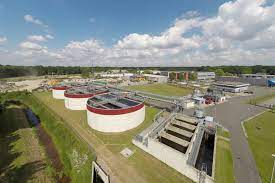 Water authorities are striving to reduce CO2 emissions and to increase raw material recovery in the treatment of waste water. Nereda technology offers energy-efficient treatment and allows a biopolymer (kaumera) to be extracted from the sludge. The Vallei and Veluwe water authority has a Nereda demonstration system at its Epe plant. The waste water treatment plant is currently only being used at around 60% of its capacity. As a result, it works less efficiently, leading to relatively lower production of kaumera and a higher specific energy consumption, and thus to higher CO2 emissions. How can things be improved?

In 2019, consultations with a slaughterhouse near the Epe plant gave rise to a joint study into the reduced pre-treatment of slaughterhouse waste water before discharge into the sewer. The load on the treatment plant would then be higher (more efficient) and the slaughterhouse would use fewer chemicals (iron chloride and caustic soda). The question was how the Nereda system would respond to the increased supply and different composition of waste water (with higher concentrations of undissolved components), and what the effect would be on (net) CO2 emissions. Pre-treatment at the slaughterhouse was turned off for 4 months, and operation of the Nereda system was intensively monitored. This article describes and discusses the results of this practical test.

The current situation at the Epe waste water treatment plant is shown in Figure 1.

The slaughterhouse waste water (around 300 m3/d) has a chemical oxygen demand (COD, a measure of the amount of biodegradable substances in the water) of 5 to 10 g/l. The nitrogen content is approximately 700 mg/l. In the existing situation, this waste water is pre-treated by the slaughterhouse in a Dissolved Air Flotation (DAF) system and then discharged into the sewer. The DAF system and the Nereda system together produce 23,000 tonnes of sludge annually (1,150 tonnes dry matter/y). This is conveyed to sludge digesters operated by the water authority.

The DAF plant was switched off for four months (March to June 2019). The waste water from the slaughterhouse was discharged untreated into the sewer and then treated at the Epe waste water treatment plant (Nereda system). The Nereda system was monitored with automated measurements in the reactors and through weekly sampling. Researchers from TU Delft tracked the enzyme activity (lipase and protease) in the different (granular) fractions in the sludge.

Despite an influent load that was around 60% higher, the effluent quality in both periods was comparable (Table 1) and well within the discharge norms. The downstream sand filter for extensive phosphate removal did use considerably more aluminium chloride than in the same period a year earlier: 173 l/d instead of 83 l/d, which was more than double. The phosphate load in the influent during the trial was, however, 81% higher than in the reference situation. If this is included, the relative increase in aluminium consumption is limited, at around 10% (i.e. from 0.20 mol Al/mol P to 0.22 mol Al/mol P). Phosphate removal rose from 37 to 67 kg P/day.

Table 1: The (total) influent load and average effluent composition at the Epe waste water treatment plant during the trial and in the same period a year earlier.

*The phosphate standard of 0.3 mg/l applies from 1 April to 30 September.

Sludge production in the Nereda system increased by around 40% during the trial compared with the months before. A change in sludge production should actually be considered over a whole year as it varies with the water temperature in a treatment plant. But, if we take the usual assumption that sludge production increases proportionally to the increase in pollution unit load, and we also include the increase in aluminium consumption at the sand filter, this amounts to a sludge increase of 398 tonnes of dry matter (DS)/y. Since the DAF system at the slaughterhouse no longer produces flotation sludge, thus saving 600 t DS/y, net sludge production would decrease by around 200 t DS/y when the DAF is out of operation.

A Nereda system forms sludge granules instead of flakes, which means that the sludge settles more easily and quickly. In our experiment, the sludge changed in terms of granular fraction and settling capacity due to the higher concentration of biodegradable COD in the waste water. At the end of the trial period, the sludge content had increased from 5.8 to 8.3 g/l and the granular fraction in the sludge (sludge particles > 0.2 mm) from 77% to 85%. Sludge growth was therefore found to be mainly caused by granular growth, with 50% of the granules larger than 2 mm. The fact that granule formation increased despite a higher concentration of undissolved constituents in the waste water (average of 633 mg/l instead of around 317 mg/l) confirms that granular growth is quite possible with relatively high suspended solid contents. A publication by TU Delft on this practical trial looks into this in more detail. This picture corresponds with experiences with solely industrial waste water in Nereda systems.

The system functioned well during the trial period, but operators identified something that requires further attention, namely accumulation in the fat trap at the plant, deposited by the industrial waste water from the slaughterhouse. Fat accumulation can lead to fouling and clogging and regular removal of the captured fat requires considerable effort on the part of operators. No negative effects of fat on sludge quality have been observed.

In order to estimate the effect on CO2 emissions of less extensive pre-treatment at the slaughterhouse, the CO2 emissions at the slaughterhouse and at the waste water treatment plant were examined. In view of the risk of fat accumulation in the sewage system and in the receiving area of the waste water treatment plant, a scenario was assumed for this calculation in which the DAF system uses only polymer dosing and no ferric chloride and sodium hydroxide dosing. Around 50% COD would then be removed instead of the current 85%. The CO2 emissions were calculated based on key figures from STOWA and from the Climate Monitor for water boards. 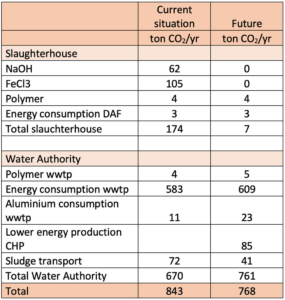 Table 2. CO2 emissions from the waste water treatment plant and DAF system in the current and potential future situation

The calculation (Table 2) shows that the CO2 emissions of the waste water treatment plant and the slaughterhouse together decrease by 75 tonnes CO2 per year, which is a 9% reduction. This is mainly due to the fact that iron chloride and caustic soda are no longer used at the DAF system and that less sludge is transported. This more than compensates for the increase in energy consumption at the plant and the lower yield from the CHP (combined heat and power unit that produces electricity from biogas after sludge digestion), even at the lower load.

A demonstration system for the extraction of kaumera from aerobic granular sludge is also in operation at the Epe plant. At the end of the practical trial, kaumera was extracted from a sludge sample from the Nereda system. The yield was around 25% of the organic matter in this sludge. This is comparable with the yield when the waste water from the slaughter house was pre-treated in the old way. Since less pre-treatment of waste water from the slaughterhouse leads to more sludge growth in the waste water treatment plant, there is the potential to recover more kaumera. If the DAF is operated at 50% COD removal instead of 85% COD removal, Epe would produce around 30% more kaumera. Depending on how it is applied (biostimulant, coating in fertilisers, etc.), additional CO2 savings can be achieved in the overall cycle.

The water authority is currently considering the continuation of the calculated scenario (50% COD removal at DAF system, without ferric chloride and sodium lye dosing). This optimises the load on the waste water treatment plant and reduces CO2emissions in the waste water chain. The demonstration system for kaumera extraction was built for three years of operational use, although the water authority is exploring whether production can be expanded and the plant kept in use for longer.
Many water authorities have to deal with under-utilised waste water treatment plants. There are undoubtedly similar opportunities for CO2 reduction by better coordinating the treatment of industrial and domestic waste water.

The Nereda system at the Epe waste water treatment plant is under-utilised. As a result, it functions with reduced energy efficiency and cannot use its full production capacity for kaumera. The water authority, Royal HaskoningDHV and TU-Delft investigated the effects of a higher load, namely with untreated waste water from a nearby slaughterhouse. This would appear to give rise to permanently high effluent quality and a significantly higher sludge content in the Nereda reactor. The latter is almost 90% due to the growth of granular sludge.

In the experiment, pre-purification was switched off completely. But, because of the risk of fat accumulating in the sewer and at the plant, fat removal at the slaughterhouse remained necessary. If the slaughterhouse were to pre-treat its waste water to a limited extent, with no use of iron chloride and sodium lye, a CO2 reduction of around 75 tonnes per year could be achieved.

This article demonstrates that there are opportunities for CO2 reduction by better coordinating the treatment of industrial and domestic waste water. A prerequisite is of course that there is sufficient treatment capacity at the plant to cope with an increase in pollution units.

When do hydraulic engineering structures approach the end of their functional life span?

When do hydraulic engineering structures approach the end of their functional life span?