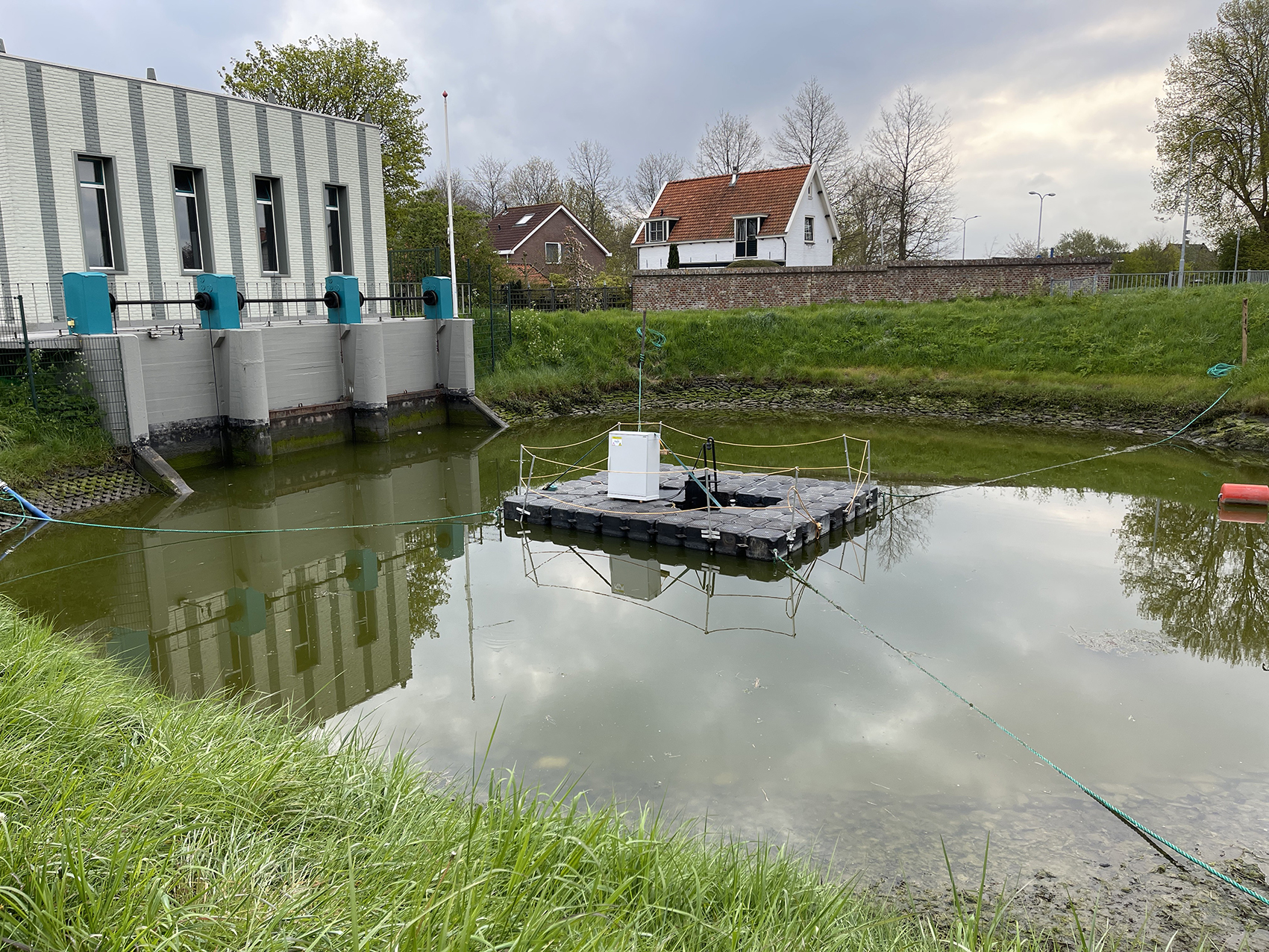 Fish travel great distances. As they do, they often become stuck on pumping stations, weirs and locks. Sound knowledge is required in order to be able to identify bottlenecks to fish migration and to tackle them one step at a time. Fish move ‘under the radar’, so research is complex and time-consuming. Using a monitoring module, automated with the latest techniques, Vislift and RAVON wish to accelerate research into fish migration. This article describes the first trial of the module, aimed at glass eels.

Fish use different habitats for different life stages – to reproduce or grow, for example. In the Netherlands, there are more 60,000 obstacles along their swimming routes, including pumping stations and weirs. Considerable attention is paid to identifying bottlenecks to fish migration in order to tackle them one step at a time. In many cases, this looks at where fish are ‘in the queue’ and how easily they can enter. But, more detailed knowledge is needed to resolve bottlenecks properly. Young eels (glass eels), for example, swim at night, so many of their movements remain unseen. How can we learn more about the natural migratory behaviour of fish? And do that with a minimum of labour? Vislift and RAVON combined their technical and ecological knowledge and jointly designed a completely new monitoring module, focused on inland migration. The aim was to automatically detect glass eels and other species, to determine their activity and supply and help understand them.

The first use of the monitoring module was aimed at glass eels and took place at polder pumping station ‘t Sas in Zierikzee. The pumping station discharges fresh to brackish water into the salty Oosterschelde. To put it simply, the monitoring module is a container in which fish can swim in and out, oriented towards an attraction flow (fresh water, supplied from the other side of the pumping station via a hose). Glass eels can remain inside the module for lengthy periods as it is fitted with brushes between which the eels can rest. In addition, there is a freely movable swim opening, camera monitoring, a fish counter and various water quality sensors. The data arrive online in real time to a single portal, with automatic image recognition through machine learning. With this, every fish that swims past the camera into or out of the module is registered and automatically identified by species. Subcutaneous colour tags or ‘VIE tags’ (Visible Implant Elastomer Tag) were used to correct double counting and gain insight into the local glass eel population and catch efficiency. A total of 147 marked glass eels were released outside the module and 60 with a different colour code were released as a control group inside the module.

During the first ten-day period after release (P1), the entrance had a maximum attraction flow of 42 cm/s at 1.78 m3/min. The tagged glass eels in the module were counted on days 3, 6 and 9, and then kept in a live tank.

At the beginning of the second period (P2), the control group was returned to the module. The remaining specimens caught during P1 were released and after 8 days, another manual count was carried out to identify double counting. During this second period, the pump ran at half speed to see the effect of a weaker attraction flow (21 cm/s at 0.92 m3/min).

As the intake was lower than in P1, the attraction flow for P3 was set to 100% again, to verify the results of P1. Unfortunately, during P3, the power supply was interrupted for 6 of the 9 days.

Due to the large number of fish entering and accumulating in the module, all glass eels were repeatedly released outside the module after being counted.

The automatic image recognition system recorded a total of 80,045 fish passing in front of the camera: primarily glass eels (73.4%), followed by three-spined stickleback (21.0%), herring (4.4%), older stages of eel (1.1%), flounder (0.1%) and a single observation of ten-spined stickleback.

Of the glass eel movements, 78% were recorded between sunset and sunrise (Figure 1).  There was a significant effect of tide: low tide gave more registrations than high tide (p<0.001) and ebb tide (p<0.001).

Figure 1. Glass eel recordings over 24 hours and by tide

In the first measurement period (P1), 63% of marked glass eels were in the module within 3 days of release (Figure 2). The intake curve then flattens out to over 76% (112 out of 147 glass eels) after 10 days. In the second period, with the weaker attraction flow, the intake efficiency was considerably lower: 39% in 8 days. After resetting the pump to 100%, 65% of the marked glass eels were in the module after 9 days (despite the power failure). The flattening of the curve in Figure 2 means that every 24 hours, 10.3% of the glass eel population stopped migrating, e.g. due to departure or death. Of the remaining supply, 37.5% entered the monitoring module every 24 hours. Approximately 8% of the control group left the module each day; therefore, the length of stay was high. Many returned over the following days. 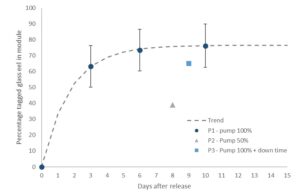 Figure 2. Efficiency of the monitoring module over three periods. During P1, glass eels from the VIE tag groups (n=10) in the module were counted after 3, 6 and 10 days (mean and standard deviation). The trend line based on P1 leads to a population model in which 10.3% stop local migration every day and 37.5% of the remaining population migrate into the module.

Due to the high capture efficiency and repeated release and return swimming, a large proportion of glass eels were observed several times. Using the VIE tags, catches and re-catches, it is possible to calculate relative numbers and a ‘snapshot’ of the present population. On day 1 of P1, 147 glass eels were marked with a VIE tag and released into the research area, on day 3, 779 glass eels were taken from the module, of which 94 of the 147 released. The total population (marked and unmarked) is therefore 779×147:94 = 1,214 glass eels (with a binomial 95% confidence interval of 1,062-1,351). This is not, of course, the total glass eel arrival throughout the season; due to influx and outflux, the total arrival is actually higher. Volunteers caught 104 glass eels with a dip net throughout the migration season.  From the number of marked eels, it can be deduced that this is approximately 2% of the total recruitment, which can therefore be calculated at 4,367 (with a considerable margin: 95% Poisson BI 1.931-8.606).

Comparison of the automated and manual counts of the influx into the module made it clear that not all colour codes were equally detectable. With blue light instead of neutral light, this improved from 37% to 68%.

The module dovetails well with the inland migration behaviour of glass eels (and other species). After all, a considerable number of fish, particularly glass eels, swim into the monitoring module with the polder water attraction flow. This can provide considerable new knowledge. For glass eels, over 76% of the marked specimens visited the module in 10 days, we consider this to be representative of the local supply. An optimal attraction flow rate and flow rate have not yet been found; more settings need to be tested for this. Automatic image recognition makes it possible to understand migration activity. At the research site, activity peaks are during the night and low tides, possibly triggered by fresh water leaks from the polder.

Fish swim back and forth and are detected several times. Image recognition still needs to be refined in order to determine the ‘net’ number of fish swimming by more precisely (automatically). The automatic recognition of VIE tag colours is also not yet conclusive. Use of VIE tags is essential to quantify supply, correct for double counting and derive population models.

Furthermore, a large number of glass eels accumulated in the module due to the high intake and time spent in the module. This made periodic manual emptying necessary. In order for the module to function fully autonomously, a solution must be found for this – e.g. by automatically releasing the fish at the location or perhaps behind the pumping station.

In its current form, the module improves the options for researching fish supply and activity at potential fish migration bottlenecks. Prior to the construction of a fish passage, it is possible to test a number of specifications, such as flow velocity, flow rate, location and positioning of the attraction flow. Further fine-tuning of gross and net migration movements would make it possible to calculate automatically with absolute numbers. In a follow-up project, the automatic VIE tag recognition will be further developed: the input of more image material will improve the reliability of detections through the learning ability of the algorithms. If accumulation can be prevented, manual emptying will become unnecessary and the module will be able to operate fully autonomously. VIE tagging of different groups of glass eel or other species would be the only manual work remaining.

We would like to thank Waterschap Scheldestromen for allowing us to use the facilities at the ‘t Sas pumping station. We would also like to thank participants in the National Postcode Lottery for their contribution to Red Onze Paling, which made it possible for RAVON to invest in this project. We owe the knowledge base from the Samen voor de Aal (‘Together for the Eel’) cross-net monitoring to the volunteers at Team Sas.

Summary
Continuous monitoring of fish with variable conditions (such as attraction flow rate) provides deeper insight into migration and behavioural patterns. Automatic species recognition contributes to the efficient collection of large amounts of detailed data. The monitoring module, designed with new techniques and variable settings, has proven itself capable of investigating migrating glass eels and other species. When applied in Zierikzee, aimed at glass eels, 63% of the glass eels present visited the module within 3 days; after 10 days this increased to more than 76%. Most glass eel activity (78%) was observed between sunset and sunrise. There were also significantly more registrations at low tide than at high or ebb tide. VIE tags are necessary for quantification – in this case, a present population was identified in the order of 1,200 specimens. Automatic VIE tag recognition is not yet conclusive and will be further developed in time to come.

Summary
Continuous monitoring of fish with variable conditions (such as attraction flow rate) provides deeper insight into migration and behavioural patterns. Automatic species recognition contributes to the efficient collection of large amounts of detailed data. The monitoring module, designed with new techniques and variable settings, has proven itself capable of investigating migrating glass eels and other species. When applied in Zierikzee, aimed at glass eels, 63% of the glass eels present visited the module within 3 days; after 10 days this increased to more than 76%. Most glass eel activity (78%) was observed between sunset and sunrise. There were also significantly more registrations at low tide than at high or ebb tide. VIE tags are necessary for quantification – in this case, a present population was identified in the order of 1,200 specimens. Automatic VIE tag recognition is not yet conclusive and will be further developed in time to come.