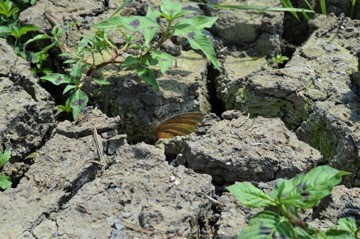 What lessons on drought, mitigation and adaptation can Dutch water boards learn from experiences, scientific articles and drought plans from countries with frequent prolonged droughts? Hoogheemraadschap de Stichtse Rijnlanden (HDSR), the water board for Utrecht and South-Holland, commissioned a study on this to complement the Blue Deal, a programme of Dutch Water Authorities with seventeen long-term partnerships in fifteen countries.

The area of HDSR is subject to various drought risks. In the high sandy soils of the Utrecht Hill Ridge, groundwater is sinking deeper and deeper, while drought in the low-lying peat lands has consequences for both agriculture and CO2 emissions due to peat compaction. In urban areas, rainwater cannot infiltrate due to paving, foundations suffer from low groundwater levels and heat islands are created. Moreover, there is a growing demand from the Western Netherlands to supply more water via the major rivers (the “KWA+” or capacity expansion of climate-resilient water supply project).

For a long time, drought received little attention in the Netherlands. In this century, 2003 and 2011 have seen major droughts, and recently the three dry summers of 2018-2020 have shown the need to anticipate the risks of water shortage. The objective of the Delta Decision on Freshwater is to ensure that the Netherlands is resilient to water shortages by 2050 at the latest. But perhaps the water boards do not need to reinvent the wheel themselves. Many countries have been struggling with drought for much longer and on a more regular basis and can provide inspiration for a different perspective on the risks and solutions.

An exploratory literature search of English-language management plans and scientific articles yielded a range of management options. Various sounding board groups at HDSR have assessed these measures on the basis of the following criteria:

A number of drought measures that are new and relevant for water boards in the Netherlands are discussed below. 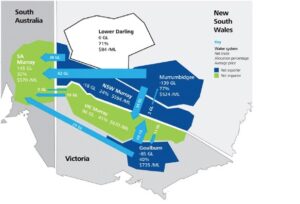 Water trading in the Murray-Darling Basin, Australia. Legend: net water trade in gigalitres (GL, 109 L), percentage of a water entitlement that may be withdrawn annually from the river/source, average price per megalitre (ML, 106 L) (Walsh, 2016).

In Australia, water rights have been decoupled from land rights to facilitate the trade of water (within a regulated ‘market’). For example, water rights can be traded between farmers, encouraging a change in production or diversification of cropping systems. Water rights can also be granted to nature organisations. Such markets have also been set up in countries such as South Africa, the United Kingdom, Chile, Canada and the United States. This may inspire Dutch water authorities to expand the infrastructure of laws and regulations on the abstraction of surface water and groundwater to improve water distribution during droughts. Such a drastic reorganisation of the control of water requires a national change and involves a lot of additional enforcement. Water rights trading is most relevant for water boards with large water shortages due to abstraction and salinisation.

The State of Indiana (USA) protects fish and their habitat through legally guaranteed inflow rights: the minimum flow of rivers must be sufficient for the fish habitat. Therefore, abstraction from a brook is only recommended as long as the discharge is higher than the minimum flow for fish survival. In the Netherlands, water quality and ecology for fish welfare are included in water level decisions, so this measure fits within the current culture and standards. Inflow rights are best applied to rivers and ditches that flow freely by gravity. Since the emphasis at water boards is now mostly on preventing duckweed and algae growth in smaller and stagnant bodies of waters, inflow rights for fish welfare offer an innovative perspective.

In order to be able to act proactively in case of longer droughts, local water consumption hierarchies have been implemented in Indiana (USA) and British Columbia (Canada). Public water suppliers distinguish different successive emergency phases in their water shortage contingency plans (WSCP). For each phase, triggers and measures are described that can be activated and deactivated by the water suppliers and water users. These series integrate the use of surface water, groundwater and alternative water sources and are interesting examples of possible additional water consumption hierarchies in the Netherlands. If reduced use is necessary, targets for reduction of water demand in percentages apply, distinguishing between drought preparedness reduction, voluntary reduction, mandatory restrictions and statutory measures. Surveys are used to monitor the effectiveness of the reduction targets. The WSCPs are public at all times so all residents are aware of expectations. It also blurs the myth of the abundance of water.

Such water consumption hierarchies would refine the role of water boards as mediators in times of water shortage. The agreements brokered by the water boards in the summer of 2018 between water users can form the basis for publicly accessible schedules of agreements and measures for the various phases of drought. They offer perspectives for action in the risk dialogue. Integral management of groundwater and surface water is also becoming more important, bringing the responsibilities of water companies, water boards and provinces closer together.

In North Africa, South-East Asia and South America, the principles of Conservation Agriculture are widely practised. One measure from this is weather index insurance. It covers deviations from a predetermined threshold of a weather index (such as precipitation or soil moisture) that can be monitored with a local weather station. These are variables with a high correlation with the farmer’s yield. Instead of receiving compensation for a reduced yield, farmers receive compensation for, for example, a lack of precipitation. This means that an insured farmer still has the same economic incentives to manage his crop smartly as an uninsured farmer and the need for insurers to assess damages in the field disappears. The disadvantage is that such insurance is a reactive way of dealing with drought. Dutch water boards and farmers are looking for more proactive and sustainable measures. Yet it is an interesting approach.

In the U.S., drought is monitored and tracked in the  U.S. Drought Monitor. It quantifies and visualises a composite indicator: a combination of different hydrometeorological indicators for meteorological drought, hydrological drought, soil moisture deficit and groundwater level. Composite indicators are a good complement to monitoring and early warning systems. As monitoring of soil and water systems in the Netherlands is of a high standard, such an elaboration is a logical next step. In addition, water boards can use water balance data to model and visualise many other drought management tools, such as water scarcity caused by climate change and the (growing) dependency of stakeholders. Which warning systems are most useful will depend on the water board or area of operation.

An example is the spatial simulation project for Australia’s rural areas, Aussie GRASS, which was developed to provide early warning of droughts and the associated major problems for grazing animals and fodder production. There are also models in use specifically for tracking water use for sewage and for water quality maintenance.

Because drought affects not only physical but also mental health, the sharing of citizens’ experiences of drought through narrative research is applied in several countries, such as Australia, South Africa and the UK. The Drought Risk and You (DRY) programme in the UK collects stories from festivals and river walks through micro-interviews (audio) and short videos. These stories can clarify problems that people have with drought. In the UK for example, these include water shortages for gardening and access to nature, and problems in agriculture. In South Africa, workshops practise the co-creation of future drought stories based on scenarios from hydrological models. Based on storylines, situated in a local context, participants can create personal narratives of the future with which they can explore (as yet) unknown drought events. This will increase social awareness and bottom-up preparedness, which may enable people to mitigate the effects of drought and adapt. Such methods can be a good supplement to the Water Boards’ Water Bosses Campaign to raise water awareness.

This study shows that Dutch water boards can take inspiration from other countries to look at their own drought problems and the division of responsibilities for them with different eyes. This makes new solutions possible. Drought measures are often about counteracting water shortages, which is not only determined by meteorological, hydrological and geophysical factors, but often also by society’s dependence on water. Drought measures from countries with diverse climates therefore prove interesting for the Netherlands, as measures are targeted at risks that are determined in varying degrees by socio-economic factors.

However, better conditions are needed for implementing results from international studies and cooperation. If the Netherlands starts to learn more from international projects, relations will become more equal and such projects can be developed and financed more easily. This also offers attractive career opportunities for employees from the Dutch water sector.

Bringing the groundwater balance into equilibrium