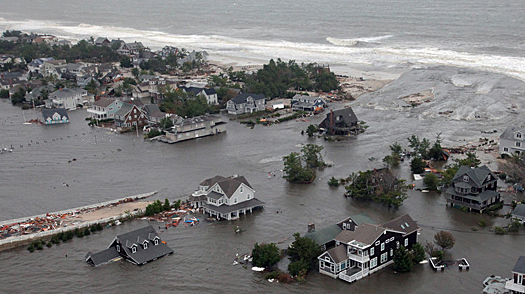 Water management in the Netherlands has traditionally covered three domains: urban area, rural area and safety (flood defences). In designing and managing water infrastructure, we have always looked at these various water systems separately, which can lead to suboptimal solutions. Integrated risk analyses allow for a broader view of bottlenecks in the water system, and put exposure at the forefront. The big advantage is that policy is developed on the basis of acceptable risks of flooding in an entire (catchment) area. Such an integrated approach also allows area standards to be developed.

Water management in the Netherlands has traditionally covered three domains: safety (flood defences), urban water systems, and water systems for rural areas. Water boards, municipalities and provinces, and the national government, each play their own very precisely coordinated role in each domain. Increasing flooding caused by peak rainfall, for example in Kockengen in July 2014, has highlighted the limitations of this approach. Better collaboration and an integrated approach are needed.

In 2016, STOWA worked with the various public authorities and RIONED to form the Flood Committee. The aim is to look coherently at cross-sector tasks and to work towards more effective solutions with greater support, based on an integrated risk analysis. But is such an integrated risk analysis feasible, and will this lead to efficiency and a meaningful perspective for the manager(s)? HKV has worked with water boards and municipalities to investigate this in four cases, based on a uniform framework (STOWA, 2020).

For each of the different water systems there are design rules and guidelines, which have traditionally been developed separately. For each water system, if the expected flooding and the expected damage increase (both the impact in euros as well as the spatial extent and non-material damage), the requirements are more stringent. These demands vary:

See it differently: the integrated view

An integrated risk analysis focuses on flooding caused by precipitation in a catchment area, whether urban or rural, or because of failure of flood defences. The term risk is key; it is defined as the product of the probability of occurrence and the consequences in an area. The probability of flooding is calculated on the basis of statistics on precipitation, storage and drainage options and the strength of levees. The consequences relate to the depth of flooding and the resulting damage (including the duration). This means that the design of the spatial environment and the crisis or management measures are also taken into account. Statistical, hydraulic, hydrological and damage models allow both the probabilities and the consequences of possible events – including interdependencies between water systems and measures – to be estimated, and with them the risk.

Example of Woerden and Oude Rijn

In the event of prolonged rainfall, the discharge of water from the polders into the Oude Rijn flood basin storage is stopped so as not to overload the flood defences. The milling stop (maalstop) results in additional damage in the polders. However, Woerden’s urban water system also discharges into the flood basin storage via an overflow system. The threshold height of this overflow is above the milling stop level, to allow free discharge of urban water into the flood storage basin.

The integrated risk analysis showed that it is possible to dispense with the strict connection between the threshold height and the milling stop level. The calculated probability of simultaneous flooding due to extreme peak precipitation (in the city) and prolonged area precipitation (in the polders) proved to be zero. Due to the slow reaction speed of the regional water system during peak rainfall, the risk of an overflow becoming overwhelmed is minimal. The threshold height could thus also be lowered. This offers the city of Woerden scope: more opportunities to drain water, less water storage needed.

This example also highlights the need to focus on losses and damage modelling. An integrated risk analysis needs to include all relevant losses: not just the damage from flooding itself, but damage to crops due to high groundwater levels as well.

It further emerged that the calculation of urban damage may have been significantly overestimated. The Waterschadeschatter calculated damage for Woerden of 15-20 million euros given 80 mm of rainfall in one hour. In September 2018, 97 mm of rain fell in one hour. The damage reported to insurance companies and the damage known to the municipality was at most several tens of thousands of euros.

Example of Rijnland: compartmentalisation of the flood storage basin

The Rijnland flood storage basin houses some old structures that allow the canal system to be divided into compartments so that in an emergency, certain sections of the canals can be isolated. Plans are currently in place to set up a mobile compartmentalisation team that can create a compartment within a few hours.

The example shows that compartmentalisation, and certainly a mobile compartmentalisation team, can be effective, and can result in lower risks and lower standards for regional flood defences. Damage to the flood storage basin is considerably reduced the shorter the section of flood basin with a lower water level. There is also less damage in a polder following compartmentalisation because there is less water flowing into the polders. The costs of the required investment in crisis management outweigh the benefits that can be achieved. The effectiveness and efficiency increase even further if predictions regarding the weather, flood basin water levels and failure probabilities are applied. It is therefore sometimes worth investing more in crisis management, and creating a mobile compartment before a potential breach, even if the flood defences subsequently prove not to have been overwhelmed.

Breda, located in a sloping area, can experience flooding due to peak rainfall in the city or extreme drainage via the Molenleij stream. Both a system analysis and an analysis of precipitation patterns (see figure 1) show that here too, peak rainfall in the city and prolonged precipitation in the rural area do not reinforce one another, but can be seen as separate events. The economic risk in the city can be reduced with measures such as preventing water from flowing into the city through the sewerage system or by reducing the vulnerability of buildings to flooding. 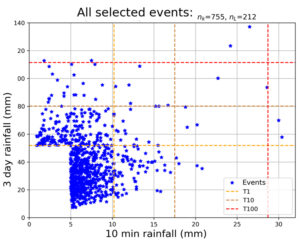 This example concerned a fictitious building, for example a large new data centre in a grassland polder. The combination of change of function and the value of this building would in principle require interventions in the water (defence) system. The integrated risk analysis shows that in such a situation, it is not always effective to improve the flood defences alone. Measures in the water system, and measures in the design of the environment and crisis management can each be effective and optimal, depending on the characteristics of the area and the value of the building.

The examples demonstrate that integrated risk analyses are feasible, and can lead to lower risks and greater efficiency of investments. An area analysis using various models, statistics, correlations and expert knowledge enables the risks to be mapped out. This uses tools that are already being used across all sectors.

One point for attention is to apply the same assumptions and definitions for failure probabilities and consequences (i.e. risk parameters should be under the same denominator). Damage modelling should also be looked at. We advise also including damage to crops due to high groundwater levels and damage caused by a reduction in the water level in the flood storage basin. Finally, we recommend evaluating and reviewing the damage functions in urban areas.

Call for the area standard, a promising proposition

The attention paid to climate change, spatial adaptation and risk dialogues indicates that the current design philosophy is at odds with society’s expectations. If the focus were on integrated risk and exposure, rather than on the requirements per water system, the risk dialogue would be much simpler. Looking at extreme precipitation in the city and in the rural area and at regional flood defences then becomes self-evident. These forms of flooding can be considered regionally, leaving scope for customisation. Primary flood defences need not be considered, because the nature and scope are quite different; in the case of primary flood defences there is also a significant risk of casualties and the policy is embedded nationally.

We call for the area standards to be applied on the basis of an integrated risk analysis, with two pillars, of which the most stringent is leading: 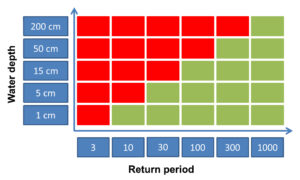 Figure2: Example of possible elaboration of the basic provisions component where different requirements are set for different water levels.

This provides opportunities for regional customisation and a lower threshold for new area developments. Governments can subsequently impose additional requirements for (special) buildings, certainly where the impact of these buildings failing is very high. Finally, building owners can independently make additional provision to limit the risks of flooding, for example through building management, design and construction.