Removal of organic micro-pollutants with advanced oxidation and dune infiltration 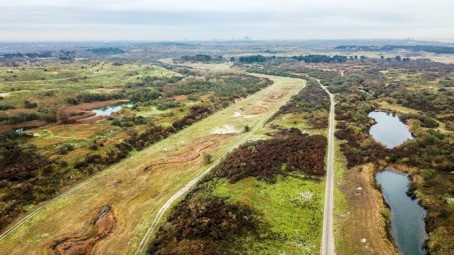 Drinking water utility Dunea (The Hague and surroundings) produces drinking water from surface water by means of dune infiltration. The quality of the surface water to be taken in will come under increasing pressure in the decades ahead due to an increase in organic micropollutants (OMPs), such as pharmaceuticals, X-ray contrast agents, pesticides and industrial compounds, combined with periodically low river runoffs. OMPs can have negative effects on health, but are difficult to remove completely. This is a serious concern for drinking water production. Does a combination of advanced oxidation and dune infiltration offer a solution?

Drinking water utility Dunea already demonstrated ten years ago that a range of OMPs is degraded in river water when rapid filtration is followed by an advanced oxidation process (AOP) with hydrogen peroxide, ozone and UV. AOP ensures the conversion of organic material into smaller carbon chains, including more easily ‘assimilable organic carbon’ (AOC). A disadvantage of this is that AOC is associated with increased bacterial growth in distribution networks. Another known disadvantage of AOP is the formation of undesirable by-products (such as nitrite and bromate) and transformation products when complete mineralisation of OMPs does not occur. Naturally, Dunea wants to limit this. Among other things, the company uses dune infiltration in the dunes of South Holland for this purpose.

The hypothesis of this study is that a combination of AOP and dune infiltration offers advantages:

To investigate this hypothesis, Dunea started a large-scale study in 2018.

The river water taken in at Bergambacht undergoes pre-purification by rapid filtration.

Then the infiltration water goes by pipeline to, among others, the Berkheide dune area (near Katwijk).

In this study, a side stream at Bergambacht was submitted to an extra pre-treatment using an advanced oxidation process (AOP) followed by activated carbon filtration. A proprietary AOP method has been developed for this, ‘GOBAM’ (the Dutch acronym for BergAMbacht Advanced Oxidation), which works with a combination of hydrogen peroxide, ozone and UV (with low-pressure lamps).

Next, the main flow (rapid filtrate) is mixed with the GOBAM-treated water (30-40%) and, after transport, infiltrated into the dunes of Berkheide. First into infiltration ponds with short residence times, then into ponds with long residence times (see opening photo). The infiltrated water is recovered by horizontal drains and pump wells at a certain distance, and is post-treated to produce drinking water (Figure 1).

The effects of this approach on the water quality in the dune infiltration system and in the final drinking water were investigated. The baseline measurements (2016-2017, no GOBAM) and the effect measurements (2018-2020, with GOBAM) used the same sampling points, distributed over the entire treatment process. Here the hydrological, microbiological, organic and inorganic chemical and toxicological effects were monitored. The following sampling points were involved:

– in the pipeline (just before arriving at the dunes),

– in the short-stay infiltration ponds,

– in the long-stay ponds,

– after approximately one metre of dune passage (in a monitoring well in each of the ponds),

– in the raw water collected from the entire Berkheide infiltration area,

– and in the post-purified drinking water.

The effect of GOBAM was assessed on the conversion of OMPs into transformation products and the formation of by-products (including bromate and nitrite) and how these behave during dune filtration. For this purpose, changes in travel times, nutrients, redox-sensitive components, heavy metals, OMP transformation products, microbiology and toxicology were monitored during dune filtration and in the final drinking water.

First, it was determined whether the dunes in the measuring periods with and without GOBAM were comparable in their potential to remove OMPs. For this, the redox conditions and the travel time above and below ground are important parameters. At all measuring points, the retention time was determined from peaks in the (semi)natural tracers chloride, electrical conductivity and temperature. In order to be able to detect any shifts in redox conditions, the redox-sensitive main components O2, NO3–, SO43-, Fe, Mn and NH4+ were analysed regularly. The differences in these between the two periods (with and without GOBAM) were found to be negligible. Changes in water quality between the two periods can therefore be attributed to other external factors, such as the quality of the intake water and seasonal effects, or to the effects of GOBAM.

The removal of OMPs by GOBAM was, as expected, very effective. Before the GOBAM step, 48 OMPs were found to be above the reporting limit at least once. Of these, 31 were more than 80% removed, and another six showed a reduction of 50-80%. GOBAM thus had a net positive effect on the quality of the water to be infiltrated. However, after dune filtration of the 37 (partially) removed substances, three compounds were still found incidentally and six substances regularly above the reporting limits. The latter were amidotrizoic acid and iopamidol (x-ray contrast agents), EDTA and urotropine (industrial compounds), acesulfame (sweetener) and primidone (medicine). This was partly due to a delay in the effect of GOBAM due to long residence times, and because only part of the water was treated with GOBAM. In the period shortly after the introduction of GOBAM, water that had not undergone GOBAM was extracted. However, after a longer monitoring period, the elimination in 2020 for the X-ray contrast agents and urotropine had improved significantly (Figure 2). 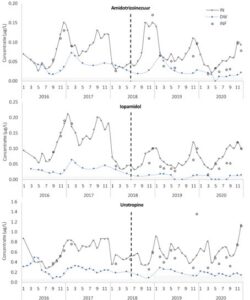 Figure 2. Concentrations (µg/L) of the X-ray contrast agents amidotrizoic acid and iopamidol, and of urotropine over 5 years, in intake water (IN; black dots), infiltration water (INF; open dots) and drinking water (DW; blue dots). The vertical line separates the periods before and after the introduction of GOBAM. The reporting limit is shown as a grey bar.

Effects of AOP on dune area

Elevated concentrations of AOC were found in the effluent of the AOP (GOBAM). In the transport pipeline from Bergambacht to the dunes, they dropped to the same level as during the baseline measurement, probably due to (limited) microbial degradation and mixing with untreated rapid filtrate. Microbial growth has not so far led to an increase in pipe resistance. Thus, the AOC formed by AOP decreased during transport and did not reach the first infiltration ponds, thus not stimulating the activity of microorganisms in the dunes. If it is decided to increase the GOBAM side stream and AOC ends up in the dunes, this effect can be further investigated.

In AOP, various (mostly unwanted) by-products are formed. In the first infiltration ponds, these can be seen: slightly elevated concentrations of bromate, bromoform and nitrite. In one of those ponds, there was minor mutagenic activity. This was no longer measurable in infiltration ponds located further away or during the subsequent dune filtration. The drinking water showed no differences between the baseline measurement and the effect measurement for the above by-products.

A parallel ecological study in the same infiltration area also showed that implementation of AOP had no effect on WFD classification (Penders et al).

These results show that AOP and dune infiltration complement each other well as a purification process. It is a good way to improve OMP removal without negative effects on drinking water production or the environment (ecology). The direct result of the GOBAM side stream was a reduced OMP load in the dunes and a faster decrease of the concentrations in drinking water. It is expected that the use of GOBAM will, in the long term, result in a further decrease in the concentrations of the aforementioned OMPs in drinking water. These beneficial effects may be applicable in more infiltration areas and in other underground and/or biological treatment processes. Follow-up research in which AOP is applied to 100% of the water to be infiltrated will provide even more insight into the effects of AOP on dune infiltration (the organic and inorganic chemistry, toxicology, biological stability and activity, and the microbial populations) and its applicability.

The extensive results of this research are described by Timmers et al. As a follow-up to this project, a geochemical and microbiological measurement programme and modelling of the behaviour of OMPs in the infiltration ponds and underground at Berkheide was carried out, in order to better understand and predict the removal mechanisms of priority compounds in the subsurface (Van de Grift et al. and Stuyfzand).