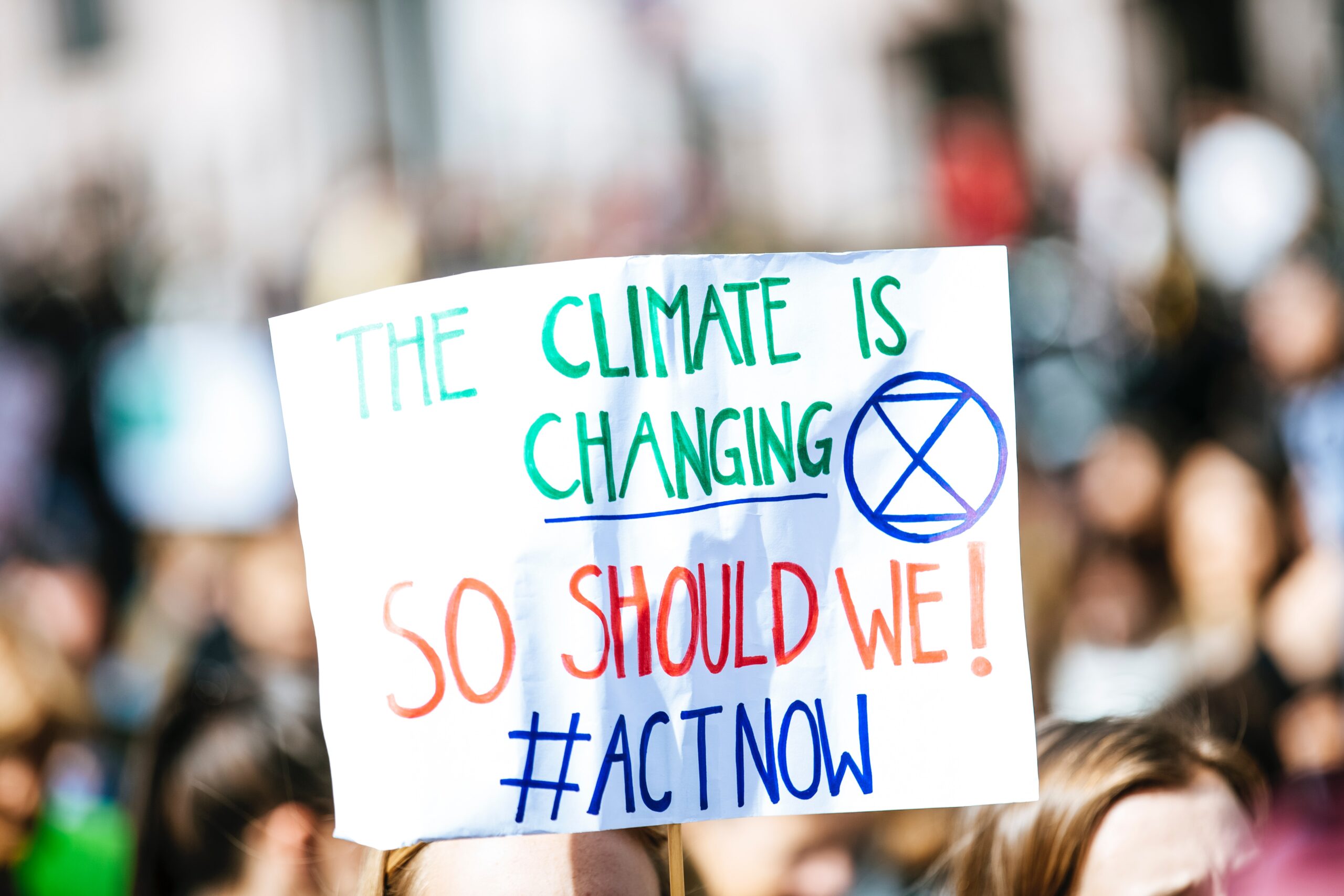 The very dry summer of 2018 raised the question of whether droughts are occurring more frequently in the Netherlands and, if so, whether that is due to climate change. The answer is nuanced and differs for the coastal strip and inland. For the inland area, the risk of drought has increased due to warming. It is difficult to say by how much the risk has increased because climate models underestimate the warming in the Netherlands. We cannot make any reliable statements for the coastal area, as the models are not reliable enough to make any hard conclusions for this area.

In the summer of 2018, the Netherlands was hit by extreme drought. The damage to farmers, shipping and water authorities, for example, is estimated at between 450 and 2080 million Euro. The drought was so exceptional that the question soon arose whether climate change was the cause.

In 2018, the entire six-month summer period (April-September) was very warm, with many more hours of sunshine than usual. In May, June, July and September, there was very little rain. This combination of low rainfall and high evaporation due to high temperatures and high solar radiation led to drought conditions. The problems in the south and east (the inland region) were much greater than in the west and north (coastal region). This was partly because the sensitivity to lack of rain is higher inland, especially on the high sandy soils. Supplementing water deprived areas with river water is not possible there, whereas it is possible in the west and around the IJsselmeer lake.

The central question of this study is whether we see trends in the occurrence of droughts in inland or coastal areas in the Netherlands and, if so, whether we can relate those trends to climate change.

In the Netherlands, a commonly used measure of drought is the potential precipitation deficit during the growing season (April to September). This is the cumulative difference between daily potential evaporation and precipitation, with negative values being set to zero. Potential evaporation is calculated using Makkink’s formula, which depends mainly on temperature and direct and indirect solar radiation (‘global radiation’). In 2018, the potential precipitation deficit at the end of the growing season, on 30 September, was greatest in the south and east of the country (Figure 1). 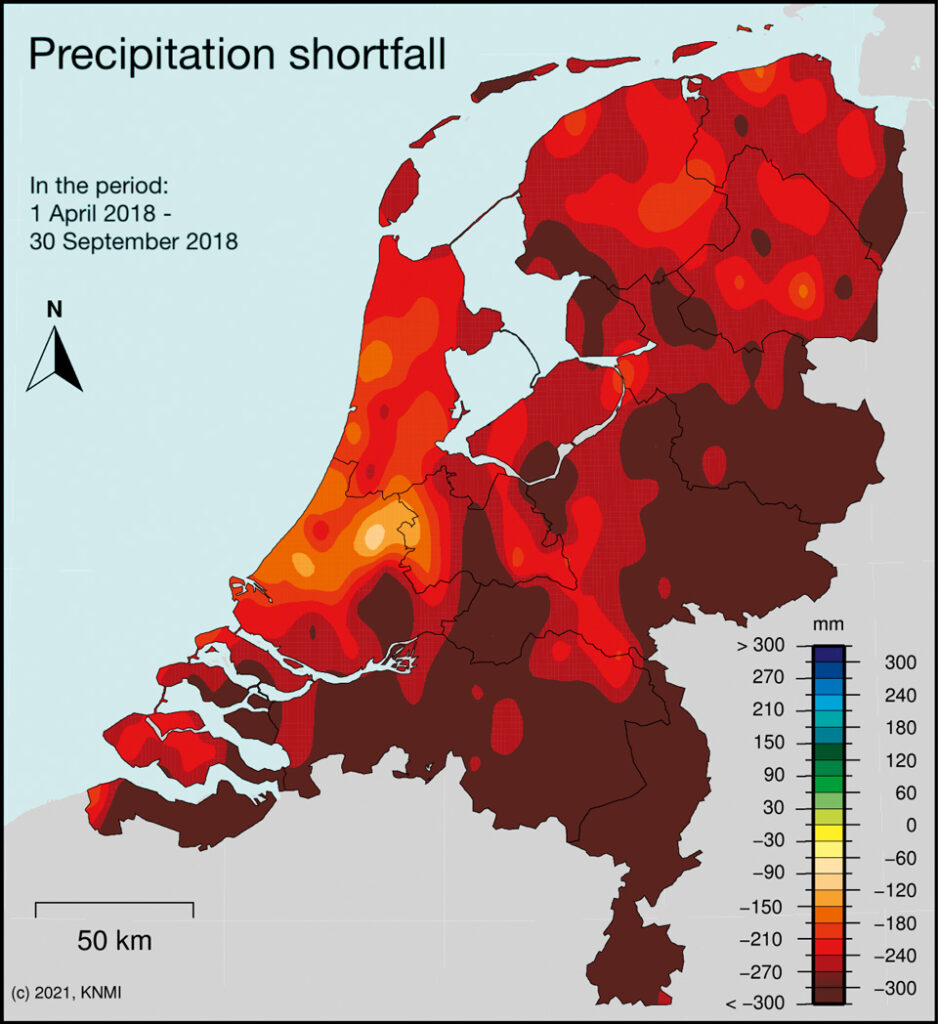 We know from previous research that precipitation trends differ between the coastal and inland areas (Lenderink et al., 2009; van Haren et al., 2012). Here we investigate whether, and if so how, this difference affects trends in drought. To this end, we define the coastal area as a strip of width 50 kilometres along the North Sea coast and at least 30 kilometres along the Wadden Sea – amounting to about 45 percent of the Netherlands. We refer to the remaining land as the inland area.

In this study, we consider four aspects of drought. The simplest is drought as a reduction in rainfall (meteorological drought). Secondly, we analyse trends in temperature. Thirdly, we look at the potential evaporation according to Makkink. Finally, we consider soil moisture drought (agricultural drought).

Figure 2 shows the trends in precipitation, temperature, solar radiation and Makkink potential evaporation. For soil moisture, no trend analysis is possible due to the lack of sufficiently long observational series. In order to determine the effect of climate change, the trends have been plotted against the global mean surface temperature (GMST). The time series of GMST has been smoothed by applying a 4-year running average, to filter out fluctuations caused by, for example, El Niño.

The GMST is now about one degree higher than it was around 1950, so the changes in the studied variables since then are about the same as the trends per degree of global warming in the figures.

The temperature increase in the Netherlands is more or less uniform. Precipitation, on the other hand, shows a spatial pattern, with a clear increase along the coast. On average, this is significant at p<10% – meaning that there is a 90% chance that this trend does indeed exist (usually we look at the 95% level). Precipitation inland shows no clear trend. The difference between inland and coastal precipitation, however, is statistically significant. This is because the weather fluctuations in both series are very similar, so taking the difference between the two results in a better signal-to-noise ratio.

For the coastal area, the discharge from the river Rhine is also relevant. It shows a slight decrease in the six-month summer period since 1901. From 1950 onwards, the decrease is about 9 percent (significant at p<10%). Precipitation in the upstream part of the catchment area has also decreased significantly. We will not discuss this further in this study. 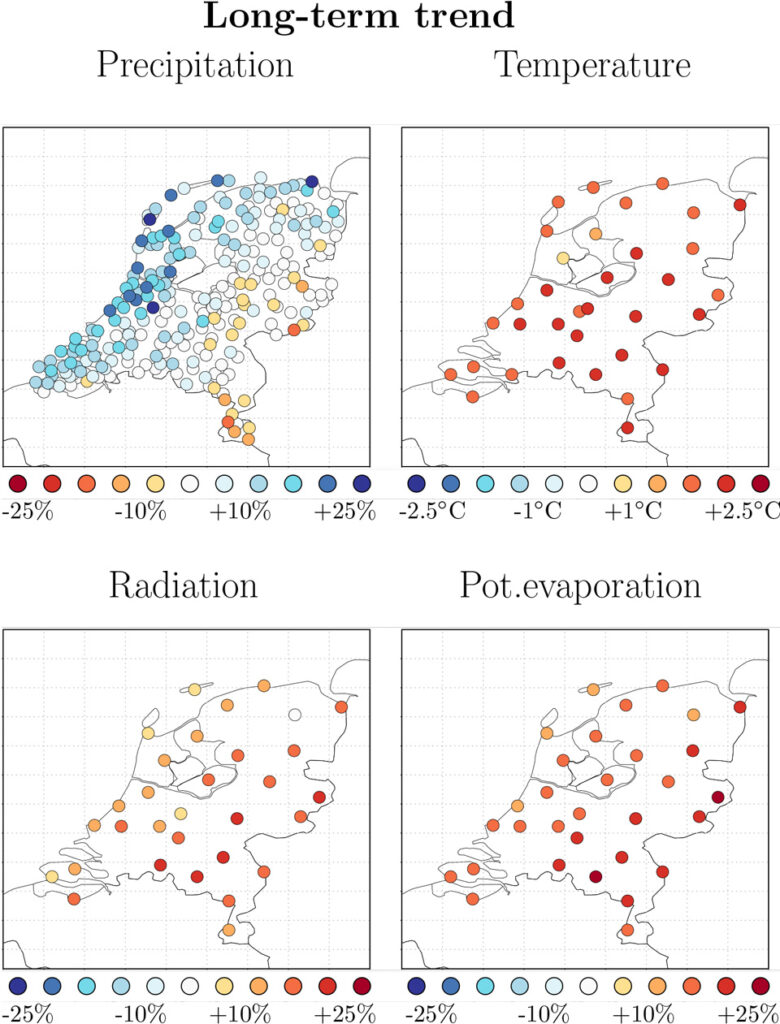 Figure 2. Trends for the period April-September from 1950, presented as the regression against smoothed global mean temperature (solar radiation and evaporation have shorter time series). Not all trends shown are statistically significant. Data: KNMI; each dot represents a KNMI station, not all variables are measured at each station

The observations since about 1970 show that the increase in global radiation is stronger inland than near the coast (Figure 2). This is confirmed by re-analysis datasets such as the ERA5 weather reconstruction from the European Centre for Medium-Range Weather Forecasts.

This trend has two components. Due to increasing air pollution with aerosols, the amount of solar radiation reaching the ground decreased until around 1985. Afterwards, this effect disappeared thanks to measures against air pollution. In addition, there is a trend towards more hours of sunshine in the summer months over the whole period (Van Oldenborgh et al., 2009).

Due to relatively more solar radiation inland, Makkink potential evaporation has also increased more there than near the coast. In combination with air pollution, we see a decrease until about 1985 and a stronger increase until about 2005.

Is climate change behind these trends?

In order to attribute these trends to climate change, we need climate models. They allow us to study the difference between a climate with increasing amounts of greenhouse gases and a simulated climate without such an increase. Of course, we first checked whether the climate models describe the real climate realistically enough. We also analysed the output of hydrological models based on these climate models. We evaluated the following models and, if sufficiently realistic, used them for attribution:

With regard to temperature, the situation is more complex. The observed trend in the six-month summer period since 1950 is 1.9 degrees per degree of average global warming, with a 95% uncertainty margin of 1.3 to 2.4 degrees per degree. The models, on the other hand, show a warming of around 0.9 times the global mean warming (Van Oldenborgh et al., 2009). We can thus attribute about half of the warming to emitted greenhouse gases. The other half either has other causes or the climate models underestimate the effect of warming on hot summers.

The increase in potential evaporation is smaller in the climate models than calculated for the real world based on observations or reanalyses. This is consistent with the lower trends in temperature in the models.

This study presents a more nuanced view compared to the analyses of drought trends for the Netherlands that have been published so far. Along the coast, there is an increase in the amount of rainfall in the six-month summer period, but not inland. Inland, the amount of solar radiation increases more than on the coast, which, together with the higher temperatures, leads to more potential evaporation.

We therefore conclude that warming has increased the likelihood of inland droughts, due to higher temperatures and sunshine leading to higher potential evaporation, combined with no trend in precipitation. It is difficult to say by how much the likelihood has increased because climate models underestimate the warming of the Netherlands. We cannot make any statements for the coastal area, because the climate models do not reproduce the observed increase in precipitation there well enough.

The data and insights gained from this study allow for a better assessment of the impact of climate change on, for example, agriculture, nature, shipping and urban water management. This can contribute to improvements in climate adaptation plans.