Determining damage in built-up areas due to extreme showers 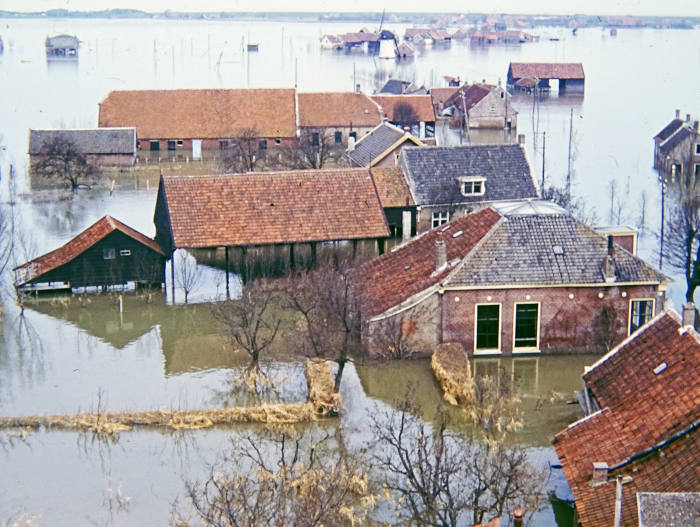 Due to climate change, extreme precipitation is becoming more common and the risk of flooding in built-up areas is increasing. To mitigate this risk, there is a growing need to be able to weigh investing in measures to combat flooding against accepting it. The estimation of water damage in built-up areas is complex and still in its infancy. To get a grip on this complexity, a refined damages model has been developed that is based on scientific research, particularly for urban environments. Quantifying water damage promotes water awareness and proactive action and it supports weighing the acceptance of flooding against measure to improve flood management.

Extreme showers can cause significant damage. On 2 July 2011, no less than 150 millimetres of rain fell in Copenhagen within the space of three hours. Overall costs estimated by insurers: €800 million. In recent years, extreme showers have also caused major damage within the Netherlands. Arcadis has developed a new damages model that makes it possible to estimate water damage in advance. This model can promote water awareness, aid in effective prevention and play a role in risk dialogues to develop local measures for climate adaptation.

Calculating water damage requires information about, for example, water depth, how long water has stood on the street, the scope of the flooded area and the quality of the water. The Netherlands has had the WaterSchadeSchatter (http://www.waterschadeschatter.nl) for the past few years, which water managers can use to gain an impression of the costs and benefits of flood-prevention measures. Research has shown that assumptions and uncertainties about this damages model have a significant effect on the calculated water tasking and the associated damage calculated (STOWA, 2019). It is especially difficult to estimate water damage in built-up areas, which is still in its infancy.

Arcadis developed a new, more refined damages model based on the scientific research of Penning-Rowsell et al. (2013). Floods in the Netherlands, Germany and the United Kingdom were analysed for this study. To quantify the various types of damage, existing damage methods have been applied and new ones have been developed where necessary. Collectively, these damage assessment methods form the basis for the new damages model.

Direct damage relates to buildings and the road network. Indirect damage is the result of traffic delays, the loss of vital infrastructure and health effects. Specific information is required to perform these quantifications (Table).

The damages model calculates the expected damage per rain shower and per year. The annual damage depends on the frequency of the extreme showers, described here as the repeat interval, such as a year. For comparison purposes: an extreme rain shower that occurs once every 100 years (T=100) will cause significant damage. The chance of a shower like this is minor. A shower with a repeat interval of 1 year (T=1) will cause less damage, but it occurs so frequently that the expected damage over 100 years can be considerable.

The recently developed damages model was applied to a residential area in the Netherlands that is vulnerable to flooding. Developed during the 60s and 70s, this residential area also contains a few companies and transformer vaults. It is low lying with a lot of paving and little greenery; the shops and homes have low doorsteps.

Using an integrated 1D/2D hydraulic model, various flooding characteristics were calculated for this area. The short-duration precipitation statistics from STOWA have used precipitation events with repeat intervals of 0.5 to 1,000 years. Illustration 1 shows the results of the model for each precipitation event, distinguishing between the types of damage.

The results show that no damage is calculated for showers with a repeat interval of up to 2 years (T=2). The capacity of the below-ground and above-ground discharge is sufficient to process these showers. For heavier showers, (T=5 and higher), however, damage is calculated, as. For showers like this, the capacity of the discharge is no longer sufficient, and there is standing water on the street that also flows into a few buildings.

As the precipitation events become more extreme, the damage calculated also increases. The ratio between the types of damage, however, does change. The relative share of damage to buildings decreases while the share of traffic delays increases. With higher levels of standing water (approx. 30 centimetres) and longer periods with water on the street (hours rather than minutes), roads become impassable for a long time. Beginning from T=50, the road surface is almost entirely submerged and the damage to the road network scarcely increases.

Health damages are not calculated for any precipitation event. The number of water-borne parasites that a person could accidentally ingest was too small in this area for someone to contract an infection (Ten Veldhuis et al., 2010). Although the survey area concerns water draining from a mixed sewer, the proportion of wastewater was small compared to the significant volume of rainwater run-off. Depending on the type of sewer system, the number of wastewater connections, the potential transit of wastewater from other areas and the amount of rainwater, the risk of infection can be considerably higher. 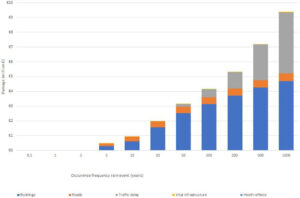 Illustration 1. Damage amounts for the area being studied, per precipitation event.

Validation of the new damages model

To estimate the accuracy, and thereby the value, of the damages model, a validation was performed. Validating damage caused by extreme precipitation was complex due to a lack of suitable data or was the result of missing observations. This study applies two validation methods. The first (common) method was to compare calculated damages with damage claims submitted to the insurer. This approach is used to validate the damage calculated for residences. The second validation method is used when no damage claims are known: a comparison with other model results. This method has been applied for damage to the other buildings and the road network. For indirect damage due to extreme precipitation, there are no damage claims nor model outcomes from other damages models available.

For the validation, information from insurers was used for the area under study concerning the flooding with a cloudburst on 28 July 2014. During this cloudburst, the water was relatively high for a short period of time and caused damage to the exterior and interior of buildings, primarily residences. This cloudburst was simulated with the aforementioned hydraulic model, with the results subsequently being entered into the damages model.

The damages model estimated the damage in the survey area to be nearly €2 million. The highest calculated amounts involve damage to buildings and the road network – each a form of direct damage. This includes flooded basements, water against the skirting boards and the costs for clearing the roads.

The calculated indirect damage due to, for example, health effects or the limited use of infrastructure was relatively low. This was the result of using the duration of on-street water as a parameter when determining indirect damage — and it was only on the street for a short time. A calculation made with the traffic model, for example, shows that although the traffic was somewhat impeded, it was still possible to keep going (at a lower speed). The vital infrastructure was quickly accessible once more after the simulated cloudburst, and few passers-by were inconvenienced due to a power failure or the disruption of the drinking water supply.

The results concern a specific residential area. The occurrence and the extent of damage will turn out differently for another area. For example, the traffic volume in an area with a motorway may be higher and, by extension, also the damaged caused by a traffic delay. Or it involves an industrial area that contains a different type of buildings. A sensitivity analysis led to additional insight into the occurrence and extent of the damage: damage to buildings and damage due to traffic delays can vary by a factor of approximately 2.5; damage to the road network and vital infrastructure scarcely vary.

Being able to apply a refined damages model is extremely valuable. Municipalities and water boards can use this model for tips on how to prioritise the protective measures for vulnerable locations. At present, the risk dialogue regarding the approach to vulnerable locations is still complex and often arbitrary in nature. Providing insight into the highest damage claims serves as a building block for prioritising and weighing improvement measures that lead to increased cost effectiveness. The use of a refined damages model can also benefit insurers. Insurers can estimate the expected damage per area and then use this ‘inside information’ to reserve more targeted capital or to differentiate premiums. And residents may even be more inclined to take preventive measures.