Bringing the groundwater balance into equilibrium 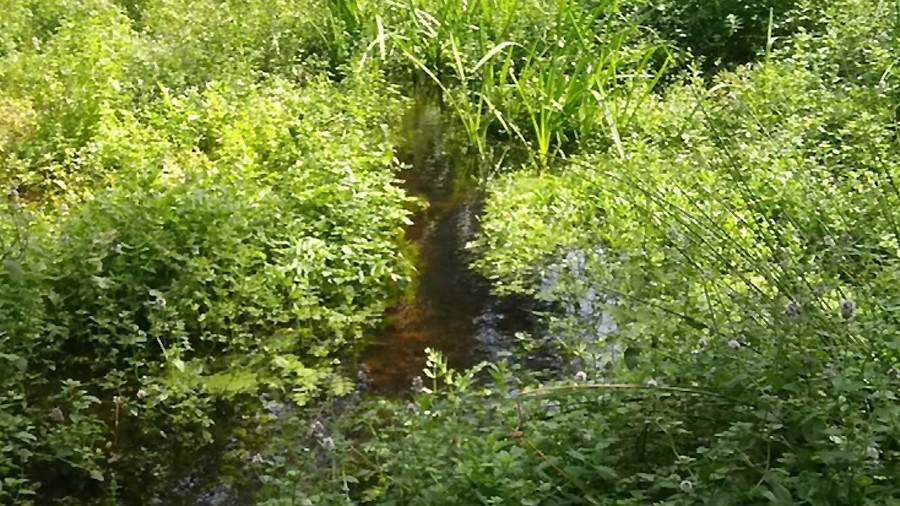 “The groundwater system is out of balance.” “More is extracted than replenished.” Or “we’re going to bring groundwater demand into balance with supply.” These are all statements that have recurred regularly in reports and press releases over the past year. There is still much uncertainty about how a groundwater balance works. Using North Brabant as an example, we address three misunderstandings and show how a groundwater balance can play a role in a vision on water availability.

The province of North Brabant with its thick sandy strata full of groundwater is special; not only is there a lot of groundwater, but the province is also very dependent on it. All drinking water is produced from groundwater and agriculture uses a relatively large amount of groundwater; it is estimated that half of the groundwater irrigation in the Netherlands is done on Brabant farmland. This article is based on two studies for North Brabant using a regional groundwater model and water balance calculations. The principles described also apply to other sandy provinces.

Basic principles of groundwater balance in this article

Misconception 1: there is more extraction than replenishment

A good balance between extraction and recharge is a logical precondition for a sustainable groundwater system and is also a requirement of the EU Water Framework Directive (Article 4.1.b.ii). If more is extracted than replenished, the groundwater system will eventually become exhausted (‘mining’). Due to overuse, deep water tables and groundwater levels continue to fall, and the boundary between fresh water and salt water rises. This is happening on a large scale worldwide, including in California, northern India and around Beijing. Figure 1 shows a highly simplified groundwater balance for North Brabant. 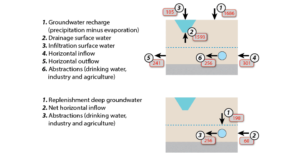 Theoretically, it is even possible to meet the entire need for groundwater in the Netherlands by extracting water from the subsoil of North Brabant, taking into account a balance between replenishment and extraction. The result: extremely low headwater levels, permanently dry streams, hardly any water in the Meuse, but still an equilibrium situation (Verhagen, et al., 2017). Extracting more water leads to a new equilibrium with lower groundwater levels and thus less groundwater runoff via surface water. Simply put, the surplus of precipitation is divided between surface water run-off and groundwater extraction. With more groundwater extraction, the surface water run-off decreases.

A balance between extraction and replenishment does not always mean a sustainable situation. The consequence of the current groundwater extraction is a permanent and constant lowering of the water tables in deep aquifers, sometimes by as much as several metres. This has consequences for the entire water system. Areas that used to be fed by deep seepage water have now become infiltration areas, groundwater levels have been lowered over a large area. This in turn affects the supply of groundwater to these areas, the amount of water drained by surface water and the amount of water available for nature and agriculture.

Misconception 2: a balanced water balance is the key to sustainable water management

It is said: “There is more than enough precipitation in Brabant, but about 80 percent is drained away, through ditches, canals and streams via the Meuse to the sea. The remaining water sinks into the ground and replenishes the aquifers. But all this water is then withdrawn for agricultural irrigation, as drinking and industrial water and for watering gardens, sports fields and other urban green spaces.”

Water runoff is an essential part of the water cycle and is needed, for example, to provide streams with sufficient flowing water (also a requirement of the Water Framework Directive).

Every drop of water is sooner or later drained or extracted, providing it does not evaporate. Surface water runoff can occur quickly or slowly; within a few days when a raindrop enters surface water via drains, or over many hundreds (to tens of thousands) of years when a raindrop eventually emerges as seepage water via groundwater flow. Water runoff therefore has many varieties; where does it come from and how long was it on the way? The low-lying areas receive the seepage water and naturally discharge more (surface) water than the core infiltration areas that lack surface water.

A general measure of the required supply of the groundwater system or the required discharge can therefore not be given, because it is area-dependent. Managing the water balance is therefore primarily a distribution issue. A more robust water balance implies smaller differences between winter and summer seasons and longer times in the groundwater system (Stuurman et al., 2020). Ideally, a sufficient buffer is built up in the spring, so that streams can continue to flow in the summer.

The conclusion is that a general consideration of recharge and extraction gives little indication for defining good groundwater status. There is no fixed ratio for the Dutch situation for the amount of extraction compared to the replenishment. A further analysis per (catchment) area is needed to gain more insight into the requirements for groundwater levels, seepage and discharge. These requirements differ for each water and nature system. For example, upper stretches of streams are highly dependent on a sufficient and constant supply of groundwater, the basic discharge. Other areas require a sufficient seepage flow throughout the year with suitable groundwater quality. 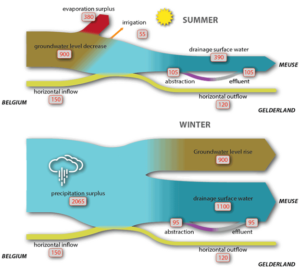 Figure 2. The groundwater balance of North Brabant for summer and winter.