Toward sustainable potato cultivation with drought 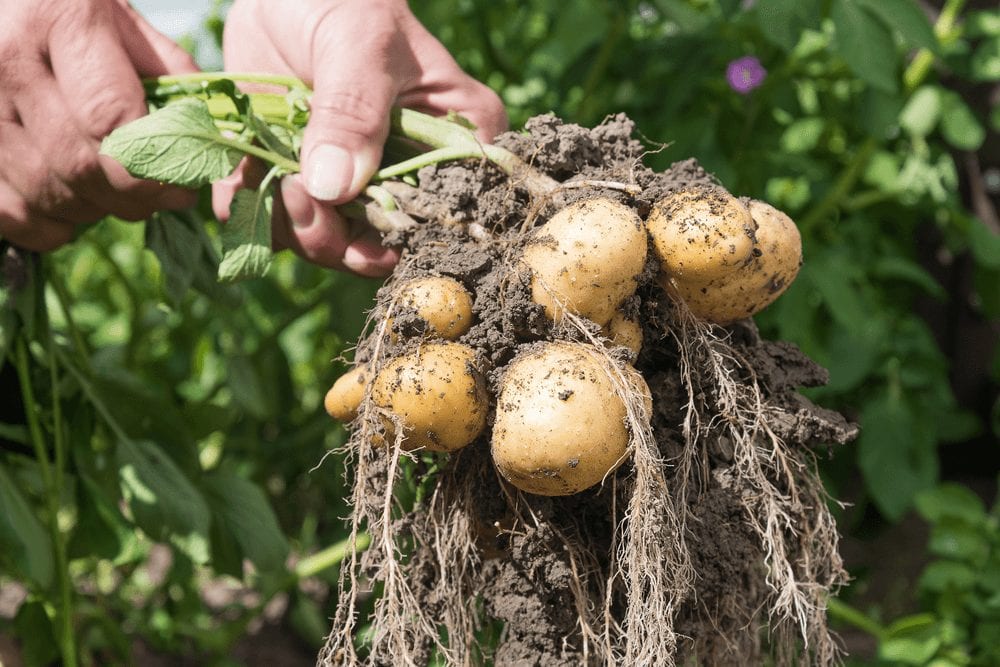 Prolonged precipitation shortfall has become increasingly common in recent years. Although measures are taken each year to limit the depletion of groundwater as much as possible, substantial savings can also be achieved on the demand side, particularly with the annual open-ground cultivation. One suitable technique is underground fertigation, in which water and nutrients are dosed according to the measured crop needs. Arid and semi-arid areas have accrued substantial experience with this technology. The article describes the lessons the Netherlands can learn from this technology.

Precision farming can considerably increase the efficiency of crop water use. One suitable technique is underground fertigation, in which water and nutrients are dosed according to the measured crop needs.

The long-term precipitation shortfall due to drought in recent years has become an increasing problem in the Netherlands that places ever higher demands on Dutch water management. Every year, measures are taken to prevent the depletion of water reserves during the summer, but the steadily falling groundwater level is a growing bottleneck. The agricultural sector is experiencing a heightened risk of loss of earnings.

The government has made efforts to expand water storage. In search of speedy solutions, the minister made €7 million available to improve the storage capacity of sandy soils – a measure to increase the water supply. But can we do something to reduce the demand for water? It is possible. Precision farming can significantly improve the efficiency of crop water use.

Given the agricultural sector’s substantial water needs, precision farming may even become crucial for the Netherlands to become water-robust in the future and to protect the economy against the negative consequences of climate change. Water-saving technologies have been deployed for years in arid and semi-arid areas. With regard to the Netherlands, can we learn from these technologies and use this knowledge to tackle the increasing aridity?

Increasing drought calls for a structural and sustainable approach

Open-ground crops are regularly watered with sprinklers; however, provinces sometimes temporarily forbid using sprinklers in the event of prolonged aridity. For several crops, the sprinkler system can be replaced with sensor-driven drip irrigation, preferably subsurface drip irrigation. When nutrients are dosed as part of the irrigation, it becomes an underground fertigation system. This is a sustainable technology that offers substantial advantages in comparison to a sprinkler system.

The more efficient use of water and nutrients, tailored to the needs of the crop, results in increased yields and reduces the use of crop protection agents. Shortening the irrigation time and increasing the efficiency of water use also reduces the electricity consumption and the degree of salinisation in coastal areas where the water has a relatively high EC (electrical conductivity).

Furthermore, subsurface drip irrigation prevents leaf damage caused by salt-bearing drops drying out after being sprayed via a sprinkler system. And finally, the leaching of fertilisers into the surface water is noticeably lower because less water is used and the fertilisers are dosed.

Despite the advantages it offers, the introduction of this technology for open-ground cultivation in the Netherlands has hardly gotten off the ground. Underground fertigation is commonly applied for multi-year cultivation, such as fruit farming and arboriculture, albeit rarely utilised for annual crops. There are suitable operational systems available and more and more moisture sensors are coming onto the market; however, several important knowledge gaps are impeding the large-scale introduction of the technology, such as:

Several of these questions are addressed in this article.

Knowledge found on the bookshelf

Within the Netherlands, a few knowledge development programmes (climate pilots) have been launched as part of the Delta Programme, but they are still in the exploration phase. Fertigation systems have been installed in arid and semi-arid areas for years, and people have accrued considerable knowledge and experience with regards to hardware and software, how to solve bottlenecks, and the drafting of criteria for successful implementation of the technology for farmers.

A project is currently underway in Algeria in which Wageningen University & Research (WUR) is collaborating with the business community to optimise water management in potato cultivation. Despite the aridity, a large agricultural area has emerged in the Sahara around El Oued, an ancient city home to approximately 140,000 residents, where an underground water reservoir (the Albian aquifer) is located close to the surface. The introduction of pivot irrigation around the turn of the century saw an enormous increase in potato cultivation. The current acreage comprises approximately 30,000 hectares and represents 30% of the total potato production of the country.

The level of water and nutrient use for this agricultural practice, however, is not sustainable. Water is free in Algeria, and farmers can irrigate crops without restriction. As no measurements are taken of the soil’s moisture content or nutrient reserves, farmers irrigate too much water and fertilise at will. The farmers use chicken manure while the supply lasts. The nozzles of the pivots are directed upwards to prevent them from clogging up with sand originating from the wells. This irrigation method places a great deal of pressure on the aquifer, while it remains unknown how much water is available and whether the extracted water will be replenished. No one knows how future-proof this set-up is.

Pivot cultivation stands to improve considerably with the introduction of underground fertigation. Experience with fertigation systems in Saudi Arabia has shown that this system can save up to 70% water and 25% energy, while yields can double.

In 2018, WUR introduced a computer-controlled fertigation system at a demo company in El Oued. Staff and students from the University of El Oued made observations, and workshops and field visits were organised for farmers. With soil sensors, online measurements are performed at five different depths  for soil moisture content, electrical conductivity and soil temperature. A weather station measures the air temperature and radiation. And a rain and flow meter measures the precipitation and the amount of irrigation water.

The evapotranspiration of the crop was calculated using a crop growth model, and an estimate was made of the water required for the following day. The graphical representation of the total moisture content (Figure 1, bottom panel) depicts the situation in the root zone: Blue is too wet; green represents field capacity and red is too dry. This graphic displays on the farmer’s smartphone and indicates the timing of the irrigation. As soon as the curve from the green zone enters the red part, it must be irrigated. In the autumn of 2018, underground fertigation resulted in a reduction in water use of approximately 60% compared to pivot irrigation, while the resultant potato harvest was roughly 40% higher.

What can the Netherlands learn from this?

Thus far, the project has provided data on the distribution of water and nutrients in the soil, water uptake characteristics in relation to crop growth and root depth, the course of electrical conductivity (EC) over time and the relationship between the soil and air temperature (Figure 2). This allowed researchers to calibrate the software for potato cultivation in relation to environmental factors (air and soil temperature, irradiation and soil characteristics). 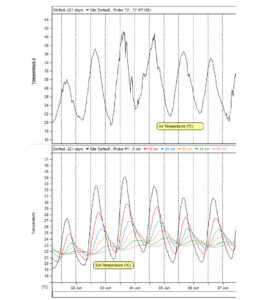 The online sensor technology is also relevant for the Netherlands, which can be applied with us on a one-to-one with basis. This is because crop growth, the water and nutrient uptake by crops and the build-up of salt and water profiles are all generic processes.

The project has yielded several intriguing insights that are also relevant to the Netherlands, such as:

As such, not only do international projects provide region-specific knowledge, but they can also offer plenty of generic applicability. For instance, the knowledge developed for dry, hot climate zones can also contribute to the development of climate-smart agriculture in one’s own country.

Get ready for Amsterdam International Water Week 2021, in-person and online